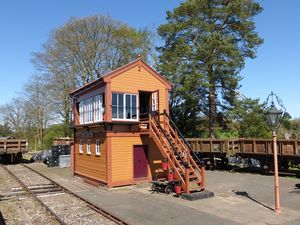 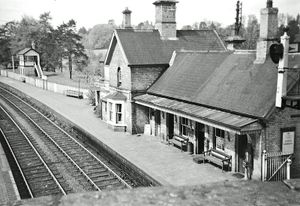 Arley in 1960 with the original signal box (Photo: Geoffrey Skelsey)

A signal box situated at Arley station, working to Bewdley North and Highley using ETT regulations in both directions. It can be switched out if trains are not required to cross.

The current signal box was reconstructed from 1974 to 1976 approximately on the site of the original signal box, which had been demolished by SVR volunteers at a time when extension southwards from Hampton Loade seemed unlikely. The frame, which has 30 levers, is originally from Kidderminster Station signal box (not to be confused with the post-preservation Kidderminster Station signal box), supplemented by specialist parts from Severn Beach and Gelli Las (Mid Glamorgan)[1]. The box superstructure was moved by road from Yorton, on the LNWR route between Shrewsbury and Crewe, to Hay Bridge, from where it was moved by rail to Arley. The signal box was fully commissioned on April 10th 1976.

At present 23 levers are in use, with 6 spaces and one spare lever. The repeater for signal number 6, the only stop signal not visible from the box, originates from the Didcot Newbury & Southampton branch of the GWR.

Unusually, when the box is switched out the yard can still be accessed, by operating the signal box lever frame as a ground frame. An intermediate token instrument is provided inside the P.Way hut to enable trains to be locked into the yard. One side effect of this operation is that whilst the yard is being shunted, the Highley and Bewdley North signalmen are unable to communicate by bell signal.

Arley is the only SVR signal box the electrically locked levers of which are operated by the lever catch handles, so the signalman does not have to push a separate release plunger.

Before preservation, the original signal box was a mirror image of the still-extant signal box at Highley, and had a 14-lever frame with no switching out facility.[2] Other minor changes include two stacked disc signals at the toe of the yard points as per normal GWR practice, and a bracket for entry to the yard at the up home signal. A diagram is available on the signalbox.org website.

A major factor in the collision at Abermule in 1921 was that the tablet instruments which controlled the single line working were installed in the station building rather than the signal box, a practice condemned by the inspecting officer Colonel Pringle.[3] Despite this, the token instruments at Arley were installed in the station booking office, only being moved to the signal box by the SVR in preservation.[4]

Arley signal box closed under BR ownership on Sunday 28 June 1964. The Train Register recording the closure was formerly on display in The Engine House at Highley.

Following closure, parts of the lever frame and much of the other equipment was used to reinstate Bridgnorth signal box in 1969[5]. An element of these parts' removal by SVR volunteers was, ironically, the demolition of the Box, meaning an entire new Box and frame had to be sourced when the SVR extended southwards (which seemed extremely unlikely in 1969 when demolition occurred). A fragment of the original interlocking is in the care of Kidderminster Railway Museum and provides an interesting demonstration on the operation of tappet interlocking.

The Down Home signals post, bracket and assemblies were originally the Up From Shrewsbury Inner Home signals at Bewdley North. It was originally located at the south end of Wribbenhall Viaduct, somewhat further south than its modern replacement, but was removed from there on 4 January 1976 due to rot in the lower part of the post.[6] These are wooden post GWR design signals as is the Up distant. The Up distant (signal 25 on the diagram above) is the only signal on the SVR included in the Wyre Forest District Council Local Heritage List.[7]
All other signals at Arley are of late GWR/BR(W) steel tubular post and enamel metal arm type. Signal 23, on the up platform, was originally the up starting signal at Llangollen, and removed by SVR volunteers before preservation efforts commenced there. Signal 1, the Down Distant, is motor worked.

As noted above, the original Arley Signal Box was demolished. The somewhat larger signal box from Adderbury, on the former GWR to Kingham branch, was donated to the SVR in early 1973 as a potential replacement[8][9]. It was dismantled at Adderbury in April 1973, and transported to Arley where it was unloaded as a 'kit of parts'[10]. However by the following year the process of installing the former Yorton box had begun. The fate of the Adderbury box is unknown.