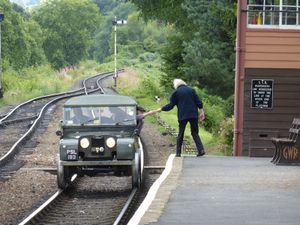 Since 2021 the SVRSevern Valley Railway's Vintage Transport Extravaganza is its main event celebrating vintage transport. It combines elements of earlier events such as Steam on the Road, Classic Vehicle Day and On the Buses. Typically it includes static displays at stations along the line of vintage cars, traction engines, tractors, motorcycles, buses and commercial vehicles. Other attractions have included tractor and traction engine road runs, a live steam model railway and the operation of PSL 193 'Plimsoll', Mark Saville’s 1957 Series 1 2-litre petrol road-rail Land Rover. A modified standard timetable is used, and standard fares apply.

This article includes a history of these earlier events up to that time. It draws in part on an article by Rob WhaleGeorge Whale, Chief Mechanical Engineer (CME) of the London and North Western Railway 1903-1909 in SVRSevern Valley Railway News 219 for Autumn 2022 entitled 'SVRSevern Valley Railway classic vehicle day events'; Rob having been involved in organising many of the events between 1991 and 2019[1].

The SVRSevern Valley Railway's first Kidderminster-based heritage bus-themed gala event was advertised as the Kidderminster Historic Road/Rail Rally and was held on Sunday 13 October 1985, coinciding with the second day of the Western Diesel Weekend. It was organised by The Erlestoke Manor Fund in aid of the restoration of 7802 Bradley Manor and featured over 70 vehicles including vintage cars and other commercial vehicles as well as buses. A vintage bus service operated at half-hourly intervals between Kidderminster and Bewdley using a 1940 Trent single deck bus and a 1950 Bedford Duple coach. The event was a success and the decision was taken to make it an annual event.[2]

During 1991 an experimental "Crossley Vintage Bus Service" ran on the first Sunday of each month, linking Kidderminster and Bewdley stations with the Bewdley Museum in the town centre. Unfortunately it did not attract sufficient passengers and was withdrawn after three Sundays as Wyre Forest Leisure were unable to continue financial support of the service.[4]

The 1991 annual event was renamed the SVRSevern Valley Railway Rail/Road Rally and was organised jointly by the SVRSevern Valley Railway and the Worcester Bus Preservation Society, with Rob WhaleGeorge Whale, Chief Mechanical Engineer (CME) of the London and North Western Railway 1903-1909 chairing the Organising Committee. The event was held on part of BRBritish Rail or British Railways's Kidderminster Station car park, with around 100 buses and coached on display and rides offered to the public.[1]

The second such event, the 1992 Vintage Vehicle Rally on 11 October at Kidderminster, was attended by more than 100 classic vehicles including some seventy buses, thirty cars and a dozen commercial vehicles. Eight single decker and four double decker buses provided a shuttle between Kidderminster and Bewdley.[5]

The joint SVRSevern Valley Railway / Worcester Bus Preservation Society events continued in broadly the same format under the title of Vintage Vehicle Day (1992-1995) and Classic Vehicle Day (1996 onward). By 1999 there were more than 300 exhibits displayed at the BRBritish Rail or British Railways station car park and another car park off Comberton Place, as well as Bewdley and Bridgnorth stations.[1]

The twelfth and final such event, which was held on 14 October 2001, included "...the usual 'Bewdley Shuttle' and Green Street 'Park & Ride' services".[6] The 'Park and Ride' service allowed the SVRSevern Valley Railway public to park in a hired car park in the town and catch a classic bus to the Railway. Unfortunately a passenger was injured after falling from the platform of a bus as it was pulling away, resulting in an acrimonious insurance claim. As a result, the Bus Preservation Society no longer participated in further events; the issue about the responsibility of insurance cover for the buses and other vehicles attending the festival also contributed to the event's demise[7].

Adding to the problems in 2001, the agreement to use the town centre car park as a 'park and ride' was withdrawn in early 2002. However the SVRSevern Valley Railway wished to continue with a similar vehicle-themed event. The October 2002 event became a Classic Car & Bike Day with around 180 exhibits although no buses. These were displayed entirely on the SVRSevern Valley Railway's own property at the various stations along the line at no additional charge.[8][note 1]

The Classic Car and Bike day, with Rob WhaleGeorge Whale, Chief Mechanical Engineer (CME) of the London and North Western Railway 1903-1909 as sole organiser, continued as a regular annual event until 2011.[1][note 2]

After Rob decided to 'retire', the Classic Car and Bike Day was missing from the 2012 timetable. The 2013 timetable saw the resumption of the October Classic Vehicle Day, billed as "Back by popular demand".[9] Between 2014 and 2018 the event was held in July. Rob WhaleGeorge Whale, Chief Mechanical Engineer (CME) of the London and North Western Railway 1903-1909 'came out of retirement' to organise the final Classic Vehicle Day which was held on 31 August 2019.

In 2002 the SVRSevern Valley Railway hosted an incoming Hertfordshire Railtours HST rail tour. A request to SVRSevern Valley Railway Marketing Manager John Leach for an event to entertain the visiting passengers resulted in the first 1960's Transport Day. This was held at Kidderminster and mainly featured classic cars together with a few buses, lorries and bikes. It became an annual event, normally held in February, and expanded to include exhibits at Bewdley and Kiderminster. However it was always subject to 'February weather' and organiser Rob WhaleGeorge Whale, Chief Mechanical Engineer (CME) of the London and North Western Railway 1903-1909 made the decision to end it after the 2010 and 2011 events were both badly rain-affected.[1]

In September 2009, the SVRSevern Valley Railway ran a trial "Bus Rally" at Bewdley to see if there was an appetite for the return of a 'busfest' type event. It proved successful and from the following year became an annual September event called On the Buses.[10][note 3]

The event featured visiting heritage or celebrity buses on display or offering rides between stations or around the local area, together with sales and information stands selling a range of bus related items and memorabilia. 27 buses attended the event in 2013. It continued as an annual Bewdley-based event until September 2019.[11]

August 2017 saw the introduction of a two-day Steam on the Road event featuring a weekend of vintage steam steamrollers, traction engines and steam wagons. The event was repeated in 2018 and 2019.

In May 2013 a three-day event of Scammell Mechanical Horse vehicles was held at Kidderminster.

The 2020 timetable included plans for the usual two-day Steam on the Road event but no Classic Vehicle Day. It also noted that the September 'On the Buses' would not take place at Bewdley, with the main displays moving to Kidderminster and Bridgnorth including rides from both stations.[14]. However none of these events took place as a result of the 2020 coronavirus disease (COVID-19) pandemic which required complete closure of the railway between March and July, followed by limited pre-booked services with rigorous social distancing for the rest of the year.

In 2021 responsibility for the new 'Vintage Transport Extravaganza' was taken over by the SVRSevern Valley Railway's paid events team[1].