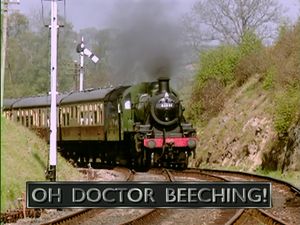 Title sequence featuring 46521
Oh Doctor Beeching! was a BBC TV sitcom consisting of a pilot episode broadcast in 1995 and two series broadcast in 1996 and 1997. The cast included Paul Shane, Jeffrey Holland and Su Pollard (former stars of Hi-de-Hi! and You Rang, M'Lord?) and Stephen Lewis, better known as ‘Blakey’ from On the Buses. It was written by David Croft and Richard Spendlove[1].

The sitcom was set in the small fictional branch line railway station of Hatley, which was threatened with closure under the Beeching Axe. The filming took place at Arley station, where a row of Victorian railway cottages was built in the yard as a film prop.

Filming mainly involved Ivatt 2MT 46521 which was named 'Blossom' for the series. Carriages used in filming included TSO 4345, BSO 9220, RMB 1853[2] and BSK 34562. Wagons used included GWR Conflat 39860 and LMS Goods Van 271726. Hugh McQuade noted in SVRSevern Valley Railway News that "I understand the BBC were looking for red and cream coaches in rundown condition to represent the 1950s-60s state of the railways. Well, at the time, the Mark 1's were almost brand new and branch lines would probably not have seen them in great numbers as pre-nationalised ex-main line cast offs would have predominated. Never mind - it's a comedy, not a documentary."[3]

The pilot episode All Change was filmed in May 1995 and broadcast on Monday 14 August 1995, attracting an audience of over 10 million viewers.[4] The BBC deemed it a success and decided to record further episodes in 1996. In late 1995 the SVRSevern Valley Railway announced that the 2006 timetable would be re-designed so that there would be three weeks in May when no trains would stop at Arley and no crossing movements would take place there, except on Sundays.[5]

The announcement in late 1995 had predicted that it would be "a further series of five or six half-hour shows". In the event another 8 episodes were recorded in 1996. Several SVRSevern Valley Railway volunteers had speaking parts, including Tony Bending and Tony Debio.[6] After filming, the fibreglass 'cottages' were dismantled and stored at the Kidderminster Carriage Works, although some 'Hatley' features were left in place to provide interest for visitors, including the signal box nameplate and station lamps. The pilot episode was rebroadcast on Monday 1 July 1986 and the new episodes weekly thereafter, apart from the final episode which was broadcast on Tuesday August 27 due to the Monday being a bank holiday.

In late 1995 the SVRSevern Valley Railway announced that the BBC would film a further 10 episodes in May 1997. On Monday 17 February 1997, 46521 was formally named 'Blossom' by cast member Stephen Lewis during a ceremony at Kidderminster Town station. A pair of new brass nameplates were attached to the locomotive; during filming of the first series there had been a standing joke that the BBC could not afford to provide two plates as only one side of the locomotive was seen on film at any given time and therefore only one nameplate had been cast![7]

Filming of the third series took place throughout May 1997. Broadcasting was moved to one of the top 'sit-com' viewing periods (described by Alun Rees as "the Sunday evening "Last of the Summer Wine" slot").[3] All ten episodes were broadcast on Sundays (although not consecutively) between 29 June and 28 September 1997.

Both series are available commercially and can be found on YouTube.

The Severn Valley Railway where the series was filmed was not a victim of the Beeching Axe, its closure having been announced by BRBritish Rail or British Railways(W) some months before the publication of his report.

The programme's name also appears as "Oh, Doctor Beeching!" in some sources including Wikipedia. The SVRSevern Valley Railway Wiki has used the version of the name without the extra comma, as seen in both the programme's title shot and studio admission ticket above.

Richard Spendlove (b. 1939) was a railwayman for thirty-five years, during which time he was appointed Relief Station Master at Cambridge in 1963, one of the youngest people to be so appointed. After retiring from BRBritish Rail or British Railways in 1989 at age 50, he became a freelance writer and broadcaster. As well as co-writing the series, he also appeared in seven of the episodes in the role of District Inspector Ernest Orkindale[8].