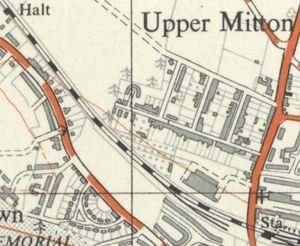 The Ministry for Home Security was created at the outbreak of Second World War in September 1939. The Ministry were responsible for the creation of many types of civil defence buildings including ‘buffer depots’ for the storage of dry food, frozen food, granaries and emergency supplies. With the supply of food, fuel and raw materials coming at risk of breaking down, the Government established a number of storage depots from 1941. These were sited to ensure good road access and, where possible, adjoining a railway and/or a canal.[1]

One such emergency grain silo and food store was built at Stourport, with a siding being provided in 1941 to serve it. The National Cold Stores facility was situated a short distance west of the station to the north of the line.[2][3] The location of the Store can be seen on the 1951 OS map, although the siding itself is not shown. The Store is visible as the large white building west of the station in the 1948 areial view of Stourport.

Access to the siding was controlled by two(?) levers and an intermediate token machine, released by token[4].