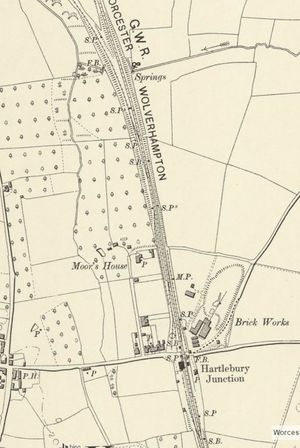 The 1903 OS Map (revised 1901) shows the area north of Hartlebury Station (labelled Hartlebury Junction). After passing Milepost 132 (M.P.), the junction is reached with the Severn Valley Line curving to the left and the OW&WOxford Worcester and Wolverhampton Railway line continuing northwards.

The junction had its own signal box which opened in June 1876 and closed in April 1977. This was a McKenzie & Holland type 2 box, originally with 20 levers, and renewed with a 27 lever GWRGreat Western Railway frame in 1912.

On 26 January 1967, a low speed head-on collision occurred between two freight trains at Hartlebury Junction, with diesel locomotives D7038 and D8138 involved. Whilst the locomotives stayed on the rails, several wagons did not, blocking the line.[1] A contemporary TV news report shows the damage. The Railways Archive suggests that the accident was not the subject of a published formal accident investigation[2].

BRBritish Rail or British Railways ended passenger services over the Stourport Branch from 6 January 1970. Coal trains to Stourport Power Station ended in March 1979.[3][4] The line, and junction, were taken out of use on 12 January 1981[5].