From SVR Wiki
Jump to: navigation, search
GWRGreat Western Railway 65620 is a vacuum-braked covered goods wagon or 'Merchandise Van' with a capacity of 12 tons. This type of wagon had the telegraph code 'VANFIT'.

65620 was one of 700 such vans built to Diagram V36 Lot 1467 between July 1945 and May 1947, at the end of the GWRGreat Western Railway's existence as a separate company. The wagons were replacements for condemned vehicles and were allocated miscellaneous unused numbers in the 65XXX series.[1][2] They were fitted with InstanterA type of three link chain coupling with a special triangular-shaped middle link which provides sufficient slack for coupling, but when rotated through 90 degrees shortens the length of the chain, reducing the slack without the need to wind a screw. couplings and also received a plywood body as a wartime / post-War economy measure, the inside having horizontal planks as ‘bump guards’ up to a height of approximately 3ft. 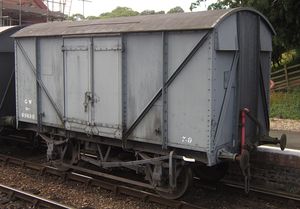 Under overhaul at Bewdley, July 2015

65620 continued in use as a store,[3], but by early 2004 was in need of ‘major surgery’.[6] A more comprehensive overhaul was carried out in 2005-6. The roof was re-canvassed using a second-hand canvas as a cost saving measure. The panels from two ends and one side were replaced, as were both door lintels.[7] In 2010 65620 was used in a photo charter Demonstration Goods Train with guest locomotive 61994 The Great Marquess.[8]

By 2015 the exterior of the van was again in poor condition and it was brought into Bewdley Goods Shed, initially for a repaint. Investigation revealed that many of the panels not replaced in 2005-6 were suffering from rot, as were some of the internal planks. On this occasion six of the eight side panels and three of the six end panels were replaced before the repaint was carried out.[9]