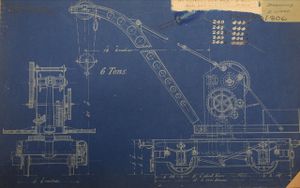 Blueprint of 446
GWRGreat Western Railway hand crane 446 was built at Swindon in 1896 and had a 3 ton capacity while moving slowly, or 6 tons while stationary with the outriggers extended.[1] This type of crane was a common sight in large yards, where they would be used for transhipping defective wagons and lifting heavy spare parts. They would also travel to smaller stations as required to load and unload wagons where there was no suitable fixed crane.


A large crank handle was used to raise and lower the crane’s hook. By attaching the hook back on to the crane itself (as seen in the picture to the right), it could also be used to raise and lower the jib. Once the jib was at the required height, locking pins would be put in and the hook detached to be used for lifting. Therefore, it was not possible to alter the height or radius of the jib while a load was on the hook[2].

The crane saw service the GWRGreat Western Railway and later with BRBritish Rail or British Railways(W).[2] It carried the DepartmentalRolling stock used for the railway’s own functions (engineering etc.) rather than for general passenger or goods traffic. number ADW 446[3] and was also given the Internal UserRolling stock used for the railway’s internal purposes (stores etc.) at one fixed location. number I/U 060982[4]. 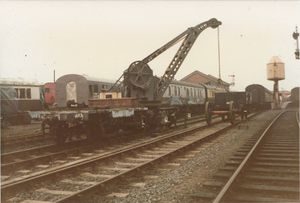 GWRGreat Western Railway Crane 446 in use at Bewdley in 1988
The crane arrived on the SVRSevern Valley Railway on 6 December 1982 from Bristol, having been acquired by The GWR 813 Preservation Fund. A small amount of work was carried out in 1983 in order to make it fit for an insurance inspection.[5] It was photographed at Bewdley in 1987,[3] although by 1998 it had yet to be restored and was stored at Kidderminster.[2][6]

The first photograph below shows the crane in March 2015, paired with Crane Runner 707261, a modified BRBritish Rail or British Railways ConflatGWR telegraphic code signifying a flat wagon for containers, and stored in the ‘Stourport Triangle’ , the junction of the Stourport Branch and the present day SVRSevern Valley Railway south of Bewdley. In January 2019 it was announced that the crane was to move to Arley for cosmetic restoration as a static display. In March 2019 the crane and runner were moved to Bewdley (second picture below). In May 2019 both had reached Arley and in July 2021 707261 was swapped with GWR 2501 'Rotank' 6-Wheeled Road Milk Tank Flat Wagon that better suits the crane.