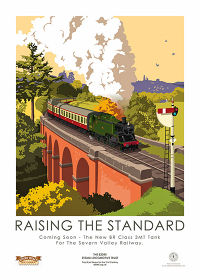 The 82045 Steam Locomotive Trust is building BR 3MT 82045, a new locomotive of the BRBritish Rail or British Railways Standard 3MTThe British Railways system of classifying steam locomotives by power using a number from 0, least powerful, to 9, most powerful, followed by either F for freight, P for Passenger or MT for Mixed Traffic. 2‑6‑2 82000 tank class, none of which survived into preservation. The class historically worked services on the Severn Valley line in BR days. Unlike many of the current new build projects which are recreating larger main-line types, 82045 is intended specifically for heritage line use.


On 6 October 2017 the Trust ran a special train consisting of one round trip Bridgnorth-Kidderminster. The name is partly derived from 82000 tank class which finished their days in and around the former LSWRLondon & South Western Railway terminus.[6]

The project to build 82045 was predicated on the idea that is intended first and foremost for use on preserved railways. The Trust sought the opinion of its members in May 2018, noting that limited main line running was still an option but involving additional expense, and that the decision needs to be taken soon, certainly before the boiler is fitted.[7] The majority opinion (although not by a huge majority) was against proceeding with the main line option[8].

In 2017 the Trust launched the 82045 Future Account to ensure that funds will be available to look after the new locomotive's future after it has entered service.[6] Once the engine is running, all finances will be channelled into the Fund: structured income built from monthly donations, steaming fees from the SVRSevern Valley Railway, plus hire-out fees from other railways which the engine will visit.[9] This includes legacies[10].