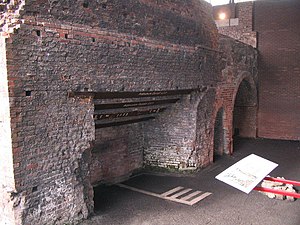 The Coalbrookdale Company was responsible for the manufacture of the ironwork of Victoria Bridge which was built between 1859 and 1861 and Albert Edward Bridge. It had previously produced the ironwork for Brooksmouth Bridge, built in 1828, which can be seen from the SVR near Borle Viaduct. The 39ft diameter waterwheel wheel at Daniel's Mill was also cast by the Company circa 1855.

File:Coalbrookdale Station.JPG
Coalbrookdale Station
Consequently, it was served by a station on the GWR's Wellington to Craven Arms Branch which crossed the Severn Valley Branch at Buildwas. Passenger services commenced 1 November 1864. Albert Edward Bridge provided the river crossing between Buildwas and Coalbrookdale.

Passenger services were withdrawn from 23 July 1962. The line was subsequently used by coal and other freight trains travelling to Ironbridge power station until its closure in November 2015. In 2019 the line was mooted by Network Rail (NR) to be mothballed. Telford Steam Railway have set out plans to extend southwards through the station.[4]