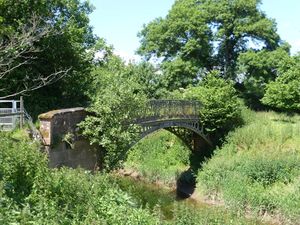 Brooksmouth Bridge is a small cast iron footbridge, via which the towpath on the west bank of the River Severn crosses Borle Brook downstream from Borle Viaduct. It is a Grade II Listed Building under the name Footbridge over Borle Brook.

The bridge consists of an elliptical arch with a slightly curving path, the spandrels being filled by conjoined diminishing circles. The balustrades, half of one side of which has been renewed, have an elongated diamond pattern. The stretcher bars across the main arch are inscribed 'Coalbrookdale Company 1828'. The cast-iron foot plates appear to remain intact. The abutments are of sandstone with string courses and parapets, one side of both of the latter replaced in brick.[1]

The bridge was built by The Coalbrookdale Company of Ironbridge in 1828, pre-dating the building of the Severn Valley Railway by more than 30 years. At that time goods traffic was transported on the River Severn in barges called Severn Trows. These were hauled upstream against the current by horses, or by men known as ‘bow hauliers’, making use of the towpath.[2]

Today the towpath forms part of the Severn Way, by which pedestrians may walk along the river bank between Arley and Highley. The bridge can be seen from the SVRSevern Valley Railway and is one of the items featured in From The Window. Its National Grid Reference is SO7530881645.