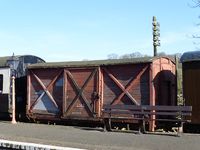 The van is seen in the photograph at Hampton Loade in its current LMSLondon Midland & Scottish Railway livery, where it is in use as a store.

Plans are afoot to relocate this vehicle and sister 302080 to Ferryhill railway centre in Aberdeen.