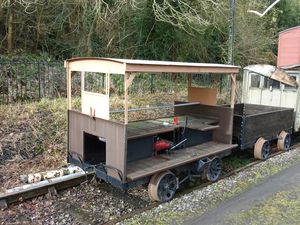 This Type 17 Wickham Trolley was built by Wickham of Ware in 1934 as Works Number 1580, and originally used by the LNERLondon & North Eastern Railway. It is powered by a J.A. Prestwich & Co (JAP) 1100cc V twin petrol engine, similar to those used in motorcycles or Morgan three wheel sports cars of that era.

The trolley was delivered to the LNERLondon & North Eastern Railway at Whittlesea on 19 July 1934, where it was given the running number 748.[1] This type of trolley was used in service as railway engineering personnel carriers, transporting PWPermanent Way working parties and materials to sites along the line.

It was subsequently moved to Highley and restored to full working order in 2008 by three volunteers, Martin Thomas, Tony Clifton and Julie Smith.[3] More details of the service history and pictures of the restoration can be found on the Highley Station website.

LNERLondon & North Eastern Railway 748 is now based at Highley station and was photographed there in February 2015. It is paired with a trailer vehicle formed from another dismantled Wickham Trolley, PWM 3189 which can also be seen in the photograph.

LNERLondon & North Eastern Railway 748 was used to give rides in Highley yard during the 2017 Peep Behind the Scenes event.