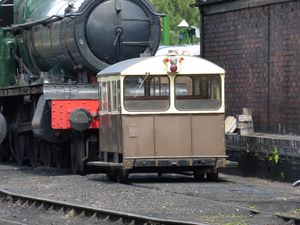 As with the SVRSevern Valley Railway's earlier Wickham Trolleys, the Type 27 began as a 'Gang Trolley' intended to transport a Permanent Way Gang of around 10 men together with their tools, although some later Inspection and Saloon Car versions were also produced. Type 27s were laid out for running in one direction and although capable of reversing, were often supplied with a portable turntable or in later versions, a built-in turntable. Those Trolleys intended for P-Way use were also commonly supplied with a purpose built Type 17 trailer. Various versions of the Type 27 Trolley were produced with quite different specifications and layouts.[note 1] The Type 27 Mk III was fitted with a 10 hp Ford 'Anglia' engine and gearbox[1].

Although the majority of Wickham Trolleys built for domestic use were destined for the main line railway network, a number were also supplied to industry and to the military for use on army railways. Wickham order number 04656 from the Ministry of Supply was for six Type 27 Mk III Trolleys (works numbers 8084-89, running numbers 9020-23 and 9030-31) and six Type 17 trailers (works numbers 8090-95) for delivery to the MoS Kineton Detachment, No1 Railway Group, Warwickshire. Delivery took place on 22 October 1958. No 9021 was fitted with Engine No S 128316 E.[1]

9021 was overhauled shortly before 1980[2]. It is believed that both ex-Army trolleys arrived in Army livery and that the first overhaul included a repaint into the yellow livery used on other SVRSevern Valley Railway Wickham Trolleys at the time. Photographs of 9021 in that livery are scarce, although it is thought to the trolley visible in this photograph by David Rostance of D1062 at Bewdley in October 1987.

9021 was still in yellow when photographed again in August 2001. However shortly after that time it was overhauled and repainted in a light green livery. The front cover of SVRSevern Valley Railway News issue 174 in Summer 2011 featured a picture by David Wilcock of 5164 arriving at Bewdley, in which 9021 and its trailer vehicle were stationed in the cattle dock. The picture of 9021 below is taken from that cover photograph and shows 9021 in the green livery.

9021 underwent a further overhaul at Kidderminster Carriage Works in 2012, during which it acquired its present brown livery. It is currently operational and is normally based at Bewdley, although it is sometimes seen elsewhere on the line, including being photographed at Bridgnorth in July 2015 (main picture above). It is sometimes paired with a trailer vehicle formed from the frame and running gear of Wickham Trolley DB965054.