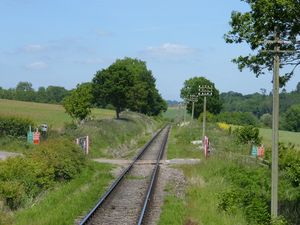 Waterworks Crossing looking north. with the Treatment Works to the right 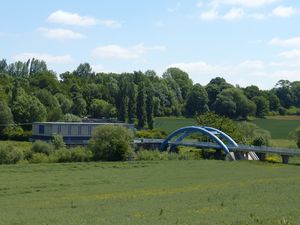 The Waterworks Crossing is situated north of milepost 145¾, a short distance north of Hampton Loade station. It provides access for a private road to the Hampton Loade Water Treatment Works which is owned by South Staffs Water.

The plant can be partly seen on the left in the second picture. The site produces water and sends it to Sedgley Reservoir where it is shared between South Staffs Water and Severn Trent Water in order to supply Birmingham and the surrounding area.[1]

Water is taken from the River Severn and piped over the bridge before settling in the nearby Chelmarsh Reservoir, which is close to the railway on the western side, although not visible from it. It is then sent back under the railway line and over the bridge to the treatment plant. After passing under the railway in the vicinity of the crossing, the pipes cross the Severn, forming the two blue arches that support the decking of the private road bridge before heading onto site for treatment[1].

The bridge was built in 1966.[2] The access road and railway crossing may be assumed to be of the same date, as there is no evidence of any track or crossing at that location on OS maps as late as 1960.[3]

Tragically, the crossing was the location of a fatal accident on 12 January 1994 where a locomotive struck a van whilst it was negotiating the crossing, fatally injuring the driver who was on his way home after finishing his shift. The train involved was an inspection special for a party of bank officials.[4] An inquest on 18 May recorded a verdict of 'accidental death' with no blame attached to the Railway.[5]

The crossing is normally kept gated when not in use, as seen in the first photograph.

The crossing in film and television

The crossing has appeared in several film and TV productions filmed on the SVR. It was featured in the 1972 ITV series "Doctor in Charge" in a scene where the doctors' car becomes trapped on it. It was also used in the 1977 Walt Disney Productions live action family film "Candleshoe" as the location at the end of the chase scene where David Niven's character parks a Rolls Royce on the crossing and flags the train to a stop.