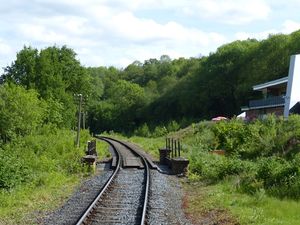 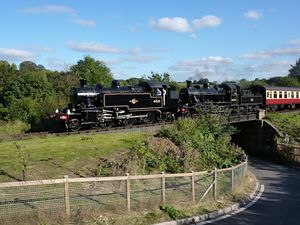 The underbridge seen from Station Road

Bridge 22 is an underbridge which allows Station Road to pass below the Severn Valley Railway. It is situated between Highley Station and The Engine House.

The bridge was built as part of the original Severn Valley Railway which opened on 1 February 1862. The cast iron girders to which the railings are attached carry the inscription "Brymbo 1861", referrng to the Brymbo Ironworks near Wrexham.[1]

The bridge was one of a number on the railway on which the GWRGreat Western Railway carried out maintenace work and other repairs during the First World War.[2] A small stone insert carrying the repair date, 29 May 1915 is inset into the cap on the eastern abutment.

Although the line through Highley closed to passengers in 1963, the bridge continued to carry coal traffic from Alveley Colliery until 1969. It was acquired from BRBritish Rail or British Railways by the SVRSevern Valley Railway in December 1972 as part of the southern section of the line.

In March 1974, during final preparation for opening the line between Hampton Loade and Bewdley in April, the SVRSevern Valley Railway were informed that the existing bridge would have to be replaced due to corrosion. A replacement bridge was hastily ordered from Rubery Owen Limited, designed for a 21 ton axle Ioading and of a similar construction to the original although bolted instead of riveted. The girders and other sections were delivered on 10 April 1974, and installed by the P.W.Permanent Way Department over the next 2 days. The deck timbers were replaced on 21 April and other works completed in time for the delayed opening of the Highley to Bewdley section on 18 May 1974[3].