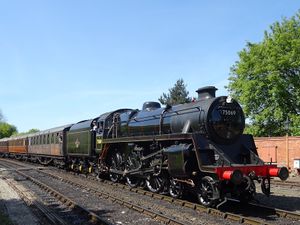 The announcement of launch of the 75069 Fund appeared in SVRSevern Valley Railway News in late 1971 with a brief article "75069: Advance notice is given of the fund to purchase this Standard Class 4 4-6-0 from BarryWoodham Brothers Scrapyard, Barry, South Wales. The source of many locomotives now in preservation., by the same team that organised the funds for 43106 and later 80079."[2] A meeting to discuss the proposed purchase the loco was held in Birmingham on 18 May 1972, following which an initial appeal raised approximately £1,300 towards the asking price of £3,500, with shares being offered in £5 units.[3] The locomotive was acquired after a further successful appeal to raise the full price before the introduction of VAT on 1 April 1973.[4]

In 2011 Railway Herald Magazine reported that a special meeting of The Passenger Tank Fund had been arranged for 30 October 2011 to discuss and vote on a proposed sale of the locomotive (80079) to Mr Jeremy Hosking with a view to the sale proceeds being applied to The 75069 Fund. [1] No such sale took place.

The fund also is a minor shareholder of Severn Valley Railway (Holdings) PLC.[5] It does not have an active presence on social media.