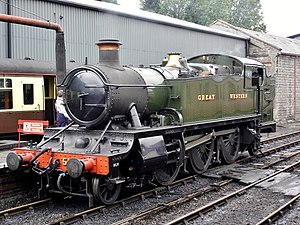 The 5164 Preservation Group were formerly the owners of GWR Large Prairie 5164 which was acquired from Barry Scrapyard in the early 1970s for use on the SVRSevern Valley Railway.

In July 2020 The Erlestoke Manor Fund announced it was in discussion with The 5164 Preservation Group and the SVRSevern Valley Railway regarding the proposed transfer of GWRGreat Western Railway Large PrairieLocomotive with a 2-6-2 wheel configuration 5164 to the EMF. The announcement noted that "The 5164 Preservation Group is an unincorporated organisation with a small, diminishing group of shareholders, who have agreed by a large referendum majority to offer the locomotive to the EMF for a nominal sum. If the transfer proceeds, this would secure the locomotive’s future within an incorporated, charitable organisation strongly affiliated to the SVRSevern Valley Railway."[1] In June 2021 all parties agreed the the formal transfer agreement.[2] The transfer of ownership for a nominal sum was completed in November 2021.[3].