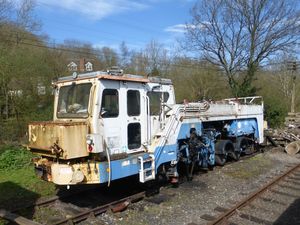 RU411 at Highley
The Plasser and Theurer UST 79 S universal tamping machine has a road-rail capability, with two bogies for rail working and a three-axle road chassis and semitrailer for movement by road.[1]

Plasser and Theurer UST79S Switch Crossing Tamper RU411 was formerly used by Balfour Beatty, and was photographed at Debden LUL in 1995. Between 2006 and 2010 it was at the Midland Railway Centre at Butterley but had arrived on the SVRSevern Valley Railway by 2011.[2] The photograph shows the tamper stabled at Highley in 2017.