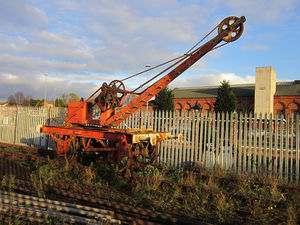 Another view of GWRGreat Western Railway 601

The GWR 813 Preservation Fund acquired two of these cranes from BRBritish Rail or British Railways(W) in 1982. An article in the Fund’s summer 1997 newsletter suggested that the one at the SVRSevern Valley Railway was No 602 (ex-6687 / 14960) and the other, then stored at the Plym Valley Railway, was No 603 (ex-6688 / 14961). The article also noted the existence of a third such crane at the South Devon Railway, not owned by the Fund, which was thought to be No 601 (ex-6685 / 14959). However a postscript in the same newsletter noted that an "identity crisis" had emerged over the SVRSevern Valley Railway-based crane, with the number 6685 having been found stamped on the solebarsThe outer member of a vehicle's underframe, running from end to end below the body in at least four locations.[1]

A subsequent article in the summer 2000 newsletter noted that the identity of the crane at the South Devon Railway had been established as 610 rather than 601. As the GWRGreat Western Railway registers confirmed the history of No 6685 becoming No 601, the Fund therefore concluded that the crane at the SVRSevern Valley Railway was No 601, with the true identity having become confused at some stage during BRBritish Rail or British Railways ownership. However the Fund’s website and the Railway Heritage Register Wagon Survey both give the first GWRGreat Western Railway number as 14960, although the original article suggests it was 14959.[3]

The crane is on display on a short section of track adjacent to Kidderminster Railway Museum.