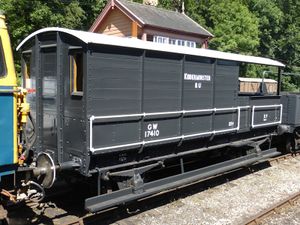 17410, June 2018
20 ton 'ToadGWR telegraphic code signifying a goods brake van, which became the standard design's nickname' Brake Van 17410 was built at Swindon in 1940, one of a batch of 100 financed by the War Department but taken straight into GWRGreat Western Railway stock. The diagram number was AA.21, lot number 1370. It was vacuum fitted with screw couplings. An original stencil on an internal wall suggests that its first allocation was to Cardiff, but when last in SVRSevern Valley Railway service it was lettered in late GWRGreat Western Railway style grey livery and allocated to "Bristol RU".

It arrived on the SVRSevern Valley Railway on 24 November 1970, purchased by a group of working members known as the 17410 Fund, and was restored the following year, after which it saw regular use by the PWPermanent Way Department. Following withdrawal as surplus to PWPermanent Way requirements and in very poor condition it languished in Bewdley yard. The van is known to many on the SVRSevern Valley Railway as "Don Wilcox's toad".

Restoration by the LNER Carriage Group began in December 2015 with the aim that once restored, it could be used as a fitted brake van on demonstration freight trains, filming and photo charters, and for brake van rides. In early 2016 the 17410 Fund transferred ownership to the SVR Charitable Trust for restoration and continued preservation on the SVRSevern Valley Railway.[1]

A new pair of veranda side doors and replacement opening window frames were made, and the end hatch restored. The layers of paint were removed from the interior, when it was found that its first, "as built" internal finish was scumble grained in imitation beech and cedar with a light oak ceiling. The number 17410 was stenciled opposite the guard's seat in pink lettering, with the word "CARDIFF" (presumably its first allocation) below. Its later (presumed BRBritish Rail or British Railways) interior finish was off white (ivory) and bauxite with a white ceiling.