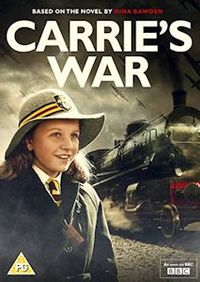 DVD Cover for Carrie's War
Carrie's War is a 1973 British children's novel written by Nina Bawden. The story follows two children, Carrie and her younger brother Nick, who are evacuated from London to a Welsh mining village during World War II. The BBC dramatised the novel in a 5-part serial broadcast in 1974.

Filming on the SVRSevern Valley Railway took place on 5-6 November 1973, principally at Highley. At that time the SVRSevern Valley Railway had only opened for passenger services between Hampton Loade and Bridgnorth; the footbridge which appears in the scenes at Highley was demolished shortly before reopening in April 1974.The train used consisted of GWR Pannier 5764 (facing north) and five GWRGreat Western Railway coaches - GWR Collett Brake Corridor Third 5787 and GWR Collett Composite Corridor 7285, GWR 7284 Composite, GWR 1087 Full Third and GWR 6562 Brake Composite. The train made several journeys between Highley and Hampton Loade, including "run pasts" at Alveley Sidings.[1] LNER 223162 Mineral Wagon was also repainted in a fictitious Welsh private owner livery for the occasion.

Episode 1 opens with a shot of the train passing through Hampton Loade northbound. A group of evacuees including Carrie and Nick are filmed aboard the train. On arrival at an unnamed Welsh station (Highley) they leave the train and assemble on the platform. The entire party of some 20 children then leaves the platform through the door to the station exit – actually the booking office which must have been very crowded as it has no exit!

A shot of the train passing through open countryside is used under the opening titles of the other four episodes. Although the evacuees are heard singing the same song as in episode 1, 5764 is running bunker first, unlike the scenes at Highley.

In Episode 5, Carrie and Nick leave Wales. 5764 and the train are seen entering Highley in the same direction as Episode 1. After they board, the train is given the right away and leaves (presumably taking the children further into Wales!).

A DVD of the series is commercially available. The BBC also produced another adaptation of Carrie's War in 2004.