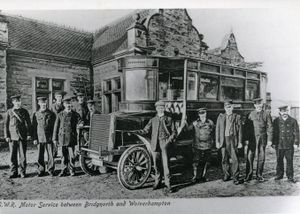 The GWRGreat Western Railway began a steam bus service between Bridgnorth and Wolverhampton on 7 November 1904 using three Clarkson steam omnibuses.[1] The service was introduced in response to number of failed proposals by other railway companies to build a direct railway between Wolverhampton and Bridgnorth.