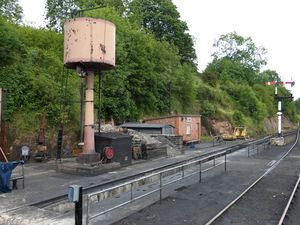 Bewdley MPDMotive Power Depot is a small open-air loco servicing facility, located at the south end of the Rock Siding at Bewdley, consisting of a pit and some light repair facilities. The pit was enlarged in 2002; formerly it was not sufficiently deep to allow MPDMotive Power Depot staff to stand underneath the locomotives and was prone to flooding.

Bewdley MPDMotive Power Depot is used by steam locomotives on diagrams originating from Kidderminster, as no steam locomotive facilities exist at Kidderminster. As there is no large store of coal at Bewdley, coaling is usually done on arrival at Bridgnorth later in the day, with a single loading being sufficient for a normal day's work of two round trips. When required, locomotives are sometimes stabled in Platform 3 or in the Down Yard, as it is only possible for one locomotive at a time to use the pit (which is required for both preparation and disposal), and also that access is generally only possible at one end of the Rock Siding, meaning that the last locomotive to enter the siding must be the first to depart.