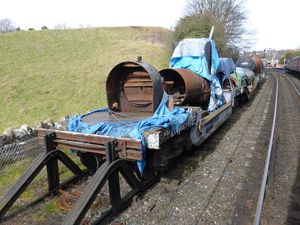 Much of its working life was spent carrying a caterpillar tracked earthmover at Nechells Power Station, Washwood Heath. After being condemned it was transferred to Willsden, from where it was acquired by Mr. J.J. Smith in 1990, arriving 6 November of that year.[2] On arrival on the SVRSevern Valley Railway it was placed into immediate use with the P. Way Department. It subsequently received a repaint with the intention of being used in the 1992 Freight Weekend, but unfortunately failed a pads exam at 9 pm on the eve of the event, resulting in a 2 hour shunt to remove it from the formation.[3] It has subsequently served mainly as a boiler carrier at Bridgnorth, in which role it was photographed in 2015 and 2016.

The Railway Heritage Register Wagon Survey suggests that 901010 is the only survivor of the 9 WeltrolTelegraphic code signifying a Well Trolley MVs built to Diagram 731 and therefore unique in preservation,[4] the other MVs being to a later diagram.