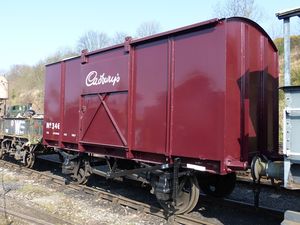 The body of this all-steel covered van is mounted on an older frame of unknown origin. The van was formerly used at Cadbury’s factory at Moreton, Cheshire. It arrived on the SVRSevern Valley Railway in the early 1970s, and was for a time painted in a fictitious SVRSevern Valley Railway S&TSignals & Telegraph Department livery numbered 8718. It has now been restored into Cadbury’s livery.