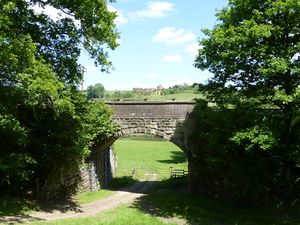 Bridge 19 is an accommodation underbridge allowing access from Severn Lodge Farm to the south end of a large field next to the River Severn. A public footpath also runs under the bridge via a stile. The photograph shows the view from the Severn Lodge side looking East, with the River Severn seen beneath the bridge and Bromley Farm on the opposite hilltop. Bridge 20 allows access to the same field.

In the Autumn of 2017 the opportunity was taken to make repairs to Bridge 19 while contractors were on site at this remote location for the landslip repair (see below). Repairs took the form of coping stone replacement, where needed, and repointing. On 17 April 2018, new coping stones were fitted to the wing walls using the 30 ton steam crane[1].

Bridge 19 is situated close to the border between Worcestershire (Wyre Forest) and Shropshire, and the area is therefore also known as "County Boundary". Travelling north, it is the first bridge not to appear on the Wyre Forest District Council Local Heritage List. Examination of Ordnance Survey maps places it around 100 yards within Shropshire.

'Worcestershire' and 'Shropshire' county boundary boards were erected by the SVR some years ago, both of which are visible from passing trains. The former is in approximately the correct position, but the latter was positioned north of Bridge 19, creating an apparent 'no man's land' between the two boards. This was done to improve visibility.[2]

In June 2017 the SVR announced problems with an embankment slippage immediately north of Bridge 19, evidence of which had first been detected in 2016 as a series of track "twist" faults.

During June 2017 the design for the remedial work required to stabilise the area was completed and work started to prepare the site for the stabilisation scheme.[3][4] The presence of an underground oil pipeline which runs beneath Bridge 19 prevented the heavy equipment required from accessing the slip area, requiring the SVR to install a temporary crossing at the site.

The stabilisation scheme principally involved 'soil nailing', a process used successfully elsewhere along the line after the storm damage of 2007. Steel rods are driven or bored through the slip into the solid bedrock beneath and secured in place with a concrete grout.[5] The photograph below shows this work in progress in July 2017. Around 500 of these 'nails' were required, as well as significant improvements to drainage in the area.[3] This included the installation of a network of “counterfort” drains below the sheet piling. It is fairly certain that there exists a spring in the locality as the ground in some areas of the slip remained boggy for the duration of the repair, even during dry spells. The drainage network will draw off the water in the embankment and discharge in the Severn. This, combined with the other trackside drainage that has been put in, should improve matters greatly.

Remedial works to the track bed itself involved four track panels being lifted over the worst affected part of the slip. Around 800 tonnes of mostly ash were removed and replaced with fresh imported stone infill reinforced with plastic “geomesh” grid.

The repairs were substantially completed by October 2017. Final work such as tamping was completed during the winter 2017-18 break, with the line restored to normal running speed for the 2018 season. The repair cost a total of £850,000 which was covered by the SVR's insurance policies[6]. The Charitable Trust also once again contributed to essential work on the permanent way.[7]