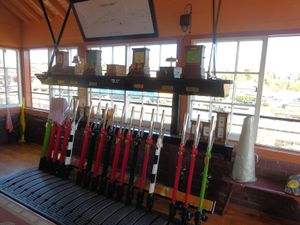 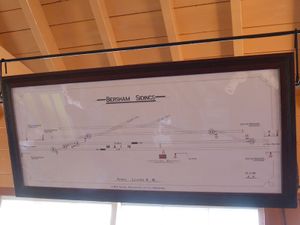 The signal box was formerly situated at Wrangaton in Devon, in the area of the former GWR main line known as the ‘South Devon Banks’. The line from Totnes climbs Rattery Bank to the summit at Wrangaton, before descending Hemerdon Bank to reach Plymouth.

The box was first opened by the GWR in 1896. It continued in use until 1966, after which the signalling equipment and lever frame were removed. It was subsequently used as a mess room by the local permanent way gang[1].

In November 1994 an appeal was made by David Postle on behalf of Kidderminster Railway Museum for SVR members based in Devon to help dismantle the box so it could be preserved. 21 local members turned up to help with this process. It was necessary to obtain a possession on the West of England main line so that scaffolding could be safely erected, this being carried out in the early hours of the morning. During the demolition the bricks were removed one by one, cleaned, numbered and recorded so that the box could be rebuilt in its exact form. Owing to the isolated position of the box, a tractor and trailer were used to transport the bricks across two fields so they could be loaded onto a lorry for transport to Kidderminster.[2]

The GWR standard 19 lever stud locking frame was recovered from a similar signal box at Bersham Colliery Sidings near Wrexham, on which the interior of the rebuilt Wrangaton box is based. The Bersham box opened in 1897, replacing an earlier box of 1874, and the frame has a casting date of 1896. The detonator placers (black and white striped levers 5 and 15) were added circa 1915.[1]

The box was opened to the public for the first time in June 2015. It is open when possible during galas and other special events or by appointment with the Museum.