This 25 ton capacity Brake Van was built by the Southern Railway’s Ashford Works in 1942 for the War Department, hence the designated telegraphic code ‘Pillbox’. Its registration number was WD(S) 1021, and first wagon number was WD 11035, later ARMY 49010.[1]

Although designed and built by the Southern Railway, 49010 never saw service with the SR or BR. It was based at the Longmoor Military Railway until closure in 1969, when it moved to the Royal Naval Armaments Depot at Bedenham, Gosport.[2]

49010 arrived on the SVR from the RNAD on 10 July 1990. After arrival a number of parts were replaced including several side and roof planks, one verandah end and the floor. The roof was also recanvassed, and the wagon painted.[3]. The decision was taken to paint it in Southern Railway colours portraying its parent company origin rather than its military history. The restoration used parts from an original SR brake van numbered 55577, and this number was duly ‘transferred’ to the restored 49010.[2]

Restoration was completed in time for the wagon to enter traffic during the 'Freight Weekend' on 1-2 June 1991. On its next appearance in the 1991 Autumn Steam Gala, an incident resulted in damage to the wheel profiles on one axle. The axle was removed and transported to Bridgnorth where the wheels were reprofiled; the opportunity was also taken to replace a leaking vacuum cylinder and fit the cabin doors with square locks to prevent unauthorised access.[4]

During the 1990s, the brake van was used on SVR Steam Schools Specials for which, being vacuum braked, it was well suited.[2]

Following the 2007 Storm Damage, 55577 was used as brake van on the 'Drain high pressure train' working between Bewdley and Northwood Halt. The train also involved Class 08 "Gladys", Esso Oil Tank Wagon 2686 acting as a water bowser, and a flat wagon with pump equipment.[5]

In March 2015 the wagon was photographed adjacent to Kidderminster Carriage Shed where it was awaiting an overhaul. This began in October 2015, being carried out by the Wagon Department in Bewdley Goods Shed,[6] and was completed in September 2017 in time for the wagon to be used in the 2017 Autumn Steam Gala. 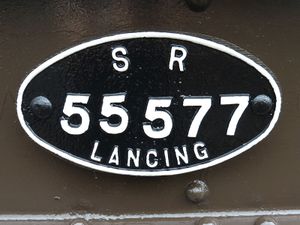 The works plate of donor SR brake van 55577
The original Brake Van 55577 was built at Lancing in 1930. Its carcass was burned out at Stewarts Lane in London, but was acquired so that parts could be used in the restoration of the 1942 brake van which now carries the number.[2]