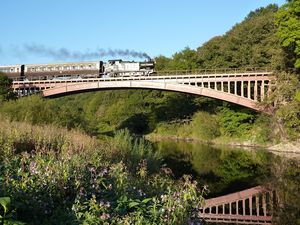 Victoria Bridge seen from the bank of the River Severn.

Victoria Bridge (Bridge 15) carries the Severn Valley Railway across the River Severn ½ mile south of Arley. It is the only place between Shrewsbury and Hartlebury where the railway crossed the river. 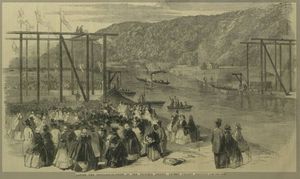 Laying the foundation stone of Victoria Bridge, from the Illustrated London News, 17 December 1859

It was reported at the time of construction that a defective rib casting was tested to destruction under a load of 430 tons.[2]

There is a near-identical double track railway bridge spanning the river Severn upstream at Buildwas. This bridge is known as Albert Edward Bridge, named after the eldest son of Queen Victoria, who was later crowned as Edward VII.

The bridge is listed Grade II* by Historic England for its special architectural or historic interest.[3]

The wording on each side of the bridge reads " Messrs. Brassey & Co., Contractors." "Victoria Bridge 1861 John Fowler, Engineer" "Cast and erected by the Coalbrookdale Company".

The deck of Victoria Bridge was originally built to double track width with overhanging walkways, similar to Albert Edward Bridge, the four arched ribs being at 4'11", 6' and 4'11" centres to place them almost directly under the rails. There is anecdotal evidence that at one time the single track was offset to one side, leaving the other side of the bridge clear for the possible laying of a second track, but was moved to its current central position in the 1950s. The overhanging walkways were removed, and the handrails moved inwards, at an unknown date.

The original 1852 estimate for the construction of the Railway, which included £8,500 for "a girder bridge at Arley",[4] also showed the station at Bridgnorth sited in the Low Town, east of the river. Although more convenient for the public, this would have required two further bridges, one south of the town near Quatford costing £8,000 and another north of the town near the present day golf course costing £9,000. A fourth bridge costing £10,000 was included near Shrewsbury in order to reach a junction with the Shrewsbury and Chester Railway. Cost saving measures adopted in the final railway plans resulted in the line remaining on the west bank and passing under High Town through Bridgnorth Tunnel instead, and joining the Shrewsbury & Hereford Railway, removing the need for these additional bridges.[1]

During the Second World War the bridge formed part of Western Command Stop Line No 1, which followed the River Severn from Tewkesbury to Llandrinio, and was protected by infantry trenches and a movable steel and concrete railblock, [5]

The bridge was subject to restrictions on the weights and types of locomotives which could be worked ‘coupled’ or ‘double-headed’ over it. The definitions of classes such as "Blue", "Yellow" etc. may be found here.

The following restrictions were set out in the BRBritish Rail or British Railways(W) 1948 working timetable:

Engines in the "Blue" group and the following engines in the "Yellow" group are prohibited from working double-headed over Victoria Bridge, Arley; Tank Engines of the 2-6-2, 0-6-2 and 0-6-0 classes, but they may be assisted by "Uncoloured" tender engines. Other "Yellow" engines may be assisted by any other permitted engine except that "Yellow" tank engines must not be coupled together.

When tender and tank engines are worked double-headed, the tank engine must be next to the tender.

By June 1963, shortly before closure of the line, BRBritish Rail or British Railways(W) had re-drafted the restrictions to read as follows:

The bridge has featured in several films and television series, of which the best known appearance is probably the scene in 1978 film The Thirty Nine Steps where Richard Hannay (Robert Powell) escapes from a train and hangs beneath the bridge. The bridge also appeared in the 1977 Walt Disney Productions live action film Candleshoe and the 1987 TV series Knights of God.

In 1978 the Board was advised that the time had come for a major refurbishment of the bridge. This began in November 1979; the work included the installation of 54 new steel beams to replace the old (rotten) transverse timber baulks which formed the decking, replacement of more than 50% of the plate-work by 6 tons of new top plate, and the replacement of 3,500 rivets by high tensile friction grip bolts. The amount of plate replaced was necessary to achieve the required structural strength for a 21 ton axle load as specified by the Railway Board. At the same time the bridge received a complete repaint using 1,200 litres of paint. The scaffolding used around 2 miles of tube and 2½ miles of planking. The final cost was approximately £94,346, equivalent to almost £½ million at 2015 prices. Despite adverse weather, the line was re-opened on time for Easter 1980,[2] although the winter closure meant that Santa Special services were moved to the north end of the line.[8]

Another major refurbishment was carried out during the winter of 2003-04. The estimated cost was £320,000, of which a significant portion related to scaffolding. The work included the replacement of the 1970s wooden bridge deck with a new steel mesh deck. The bridge was re-opened by a young lady named Victoria Bridge from Cradley Heath. It was her first visit to the SVRSevern Valley RailwaySVRA:Severn Valley Railway AssociationSVRS:Severn Valley Railway Society.[9] The refurbishment received a commendation in the Institution of Civil Engineers’ 2005 Historic Bridge and Infrastructure Awards.

To preserve the structure the bridge has a permanent speed limit of 15 mph and is also subject to operating restrictions which means that two large engines may not work double headed over it. A lower 5mph speed limit applies to any two engines coupled together while passing over Victoria Bridge. This lower limit also applies to LMR 600 Gordon when working solo.[10]