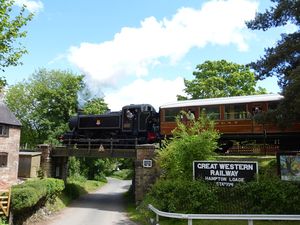 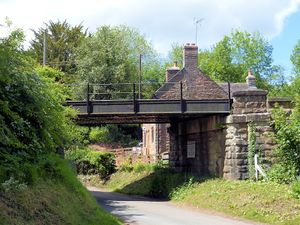 Bridge 23 (Bridge 28 during the BR era) is an underbridge immediately north of Hampton Loade station which allows the small access road to Hampton Loade village to pass underneath the Severn Valley Railway.

During the GWR and BR era, the Severn Valley Branch between Bewdley and Ironbridge was classified as a ’dotted blue’ route, meaning locomotives were restricted to an axle load of 17½ tons. The Light Railway Order which allowed the SVR to begin operations in 1970 imposed the same restrictions.

In spring 1975 a structural analysis of bridges along the line was prepared in order to seek permission to increase the limit,[1] with the intention of upgrading the line to a 20½ ton axle weight.[2]. The main girders and associated steelwork of the underbridges at Hampton Loade and Hay both needed to be replaced. Two new bridges were fabricated by Rubery Owen Limited using a similar design to the underbridge replaced at Highley the year before.

The new steel platework was delivered to Eardington in May and assembled there. The seams of the platework were filled with molten bitumastic and the rest of the bridges given a coat of bitumastic paint. Preparatory work on the old bridges consisted of cutting the ash plate joining the two troughs and removing the timber walkways at the sides.

Hampton Loade was the first of the bridges to be replaced, with the work taking place in the first week of June. Lifting was carried out using "Toby Jiblets"the 6-ton steam crane. At the start of the week the Permanent Way Department lifted the rails. The Civil Engineering Department then completed the cutting of the ash plate and lifted out the old troughs which were put aside for cutting up. New rubber bearing pads were laid, the new troughs were installed and the new ash plate fitted. New ballast was put in the troughs to support the timber baulks holding the rails. The bridge itself was reinstated with no significant problems.

Over the next few days the track was packed by the permanent way staff. When the rails on the bridge were reinstated, they stood about two inches higher than before due to the new bridge being of a different design to the original. This required the track to be lifted on either side of the bridge to meet the new position. On the north end this in turn meant lifting the points there and adjusting the S&T Department's point rodding and detection. All the work was completed in time for trains to run a normal service at the weekend. The process was repeated at Hay over the following week[3].

The proximity of the bridge and the points to the station can be seen in the view from Platform 1 below. 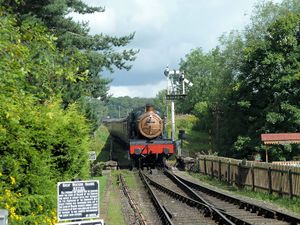