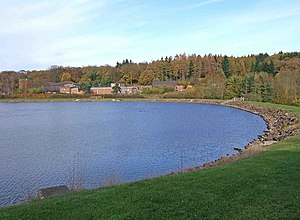 The Pumping station was opened on 5 May 1967 by Ralph Yates, Chairman of the Birmingham Water Committee. A short clip of the ATV Midlands News item, with a background image of a train on the SVR branch is available to watch on Media Archive for Central England.

The reservoir is open to the public. It is used by the Trimpley Sailing Club, while other activities include angling, wildlife watching and walking. A public footpath between the reservoir and Eymore Wood crosses the SVR via a gated foot crossing.

In May 2007 the SVR delivered 50 new water pipes for Severn Trent Water's scheme to improve water supplies in south Shropshire with the Trimpley to Hollywaste rural supply main.[1]

Construction of the reservoir began in 1964 and the November 1964 BR list of temporary speed restrictions and engineering works mentions a temporary level crossing for contractor's plant on the site of the waterworks at 140m 5ch between 7:30am and 5:30pm each day.