The development of Kidderminster Town Station

This page gives a history of the creation of the SVR’s Kidderminster Town Station on the site of the former BR goods yard.

The SVR applied for the Light Railway Order (LRO) necessary to operate over the last section of the line between Foley Park and Kidderminster. Even though they would now own the line, without an LRO they could not use it without a hired-in BR driver. This made it more difficult and costly to move materials to Kidderminster from elsewhere on the line.

BR allowed certain preparatory works to take place, including lifting the old sidings, points and stop blocks ready for construction of the new platforms. These materials were piled up for later sorting and re-use.

March 1984: The SVR site was temporarily fenced off from the BR lines, a BR flagman standing duty on the main line while this work was carried out.

April 1984: BR allowed temporary adjustments to the layout in advance of proposed engine movements. The existing SVR line into the BR down goods loop was slewed into the former second siding, allowing SVR trains direct access to the goods yard. There were still three other connections to BR at various points, only one of which would be retained.

Work began in earnest with BR granting “walking permits” for workers on the site. The proposed opening date of 30 July gave just eleven weeks to complete the job. Construction of the platforms took place. Concrete sleepers were brought in by rail from Bewdley on 11 May using D1013 Western Ranger crewed by BR men, and the section from the former second siding to the Hoo Road Bridge was relaid in the first week. All other trackwork between the new running line and BR was recovered, including the two redundant connections. New drains were dug and new ballast laid, so that new tracks and points could be installed. New signalling equipment was also installed.

In the rush to achieve the planned opening dates, a number of mistakes were made. The materials lifted during the preparatory work in February were dumped on what became the new alignment of the line, and some time was lost moving them. An error in dimensions led to the platform height being several inches too short, so wooden sleepers were installed between the platforms not for authenticity but because they were shorter in depth than the concrete sleepers purchased for the job. Late in the day the platform road had to be slewed by 2” due to an out of date ex-LNWR gauge having been used when it was first laid.

Granting of the Light Railway Order late in the day finally allowed the SVR to use the line in the last week of construction; tasks still to be completed at that stage included installation of the dock platform road, lifting packing and slewing the run-round loop and replacing the BR/SVR boundary trap points at Foley Park with plain track. However the line was passed fit by the Railway Inspectorate, and the opening day deadline was met.

Most of the work involved was carried out by the SVR’s P.W. Department, and P.W. Loco drivers and firemen were given the honour of crewing the inaugural services.

The opening day was summarised thus in the first paragraph of the General Manger’s Notes, SVR News Issue 73:

“So we did it, didn’t we! 30th July saw the opening to the public of the Kidderminster Extension, and if ever there was a close run thing on the SVR, this was it. When I tell you that the Light Railway Order did not become operational until 00.01 hours on Saturday morning, 21st July, and that the Line Inspection by Major P.M. Olver of the Railway Inspectorate did not take place until Tuesday Morning, 24th July, you can see how little margin was left for a last minute deferment of the public services. But all went well, Major Olver gave us a detailed inspection and we passed with flying colours, so enabling a further last minute effort to be made prior to the ‘Kidderminster Venturer’ leaving our new terminus slightly behind schedule at 12.30pm. “So ends the beginning”, and without the total support of our members and shareholders, we would not have been able to achieve the objective which was but a gleam in the eye of the group of local railway enthusiasts who held that famous first meeting in July, 1965 at the ‘Coopers Arms’ in Kidderminster. It was a shame that the originator of the SVR, Keith Beddoes, was unable to be among the invited guests on opening day. The late Sir Gerald Nabarro was always totally firm in his opinion that our Railway would reach Kidderminster, and his dream as identified in the first public Prospectus which we issued in April, 1972 was to see a new station arising from the present one at Kidderminster bearing the legend once displayed at Hartlebury ‘CHANGE HERE FOR THE SEVERN VALLEY LINE’. I feel that we have achieved that objective which was eventually shared by just about every single member and shareholder of the SVR and perhaps the most moving and heart-warming comments to be made on the day were from those of our long-standing members who said that this had been the happiest day on the Railway since we ran our first public service in May, 1970. Those words were part of a day which will live in the memory of those of us who were privileged to attend.”

Two of the SVR’s flagship locomotives took pride of place. 4930 Hagley Hall hauled the inaugural 12:30 ‘Kidderminster Venturer’ to Bridgnorth, appropriately consisting of 9 coaches of GWR stock referred to above. Twenty minutes later the inaugural service from Bridgorth ‘The Kidderminster Envoy’ arrived behind 45690 Leander to the sound of exploding detonators which had been placed on the line. British Railways ran a special DMU service from Birmingham New St. carrying a large ‘Severn Valley Railway’ board.

Early signalling arrangements at Kidderminster, with the ground frame visible to the left, adjacent to the bridge pillar (M. Gibbons) 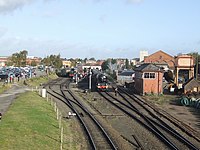 How the scene has changed since February 1984 (Geograph)

After opening, the Railway was initially restricted to ‘one engine in steam’ on the Kidderminster extension. During the summer of 1984 facilities at Kidderminster were primitive; the booking office was a converted coach, catering and toilets were temporary structures and the gift shop was likely to blow away in a gale. But already the new station building was under way, funded by the 1983 share offer. Phase 1, the West wing now housing the gift shop, opened in time for the 1984 Santa Special services to run from Kidderminster. Phase 2, including the station front, was built the following summer. The first watering facilities were also commissioned during 1985.

Pointwork around the station was initially controlled by the 6-lever Kidderminster ground frame, released by the Bewdley South--Kidderminster staff. The current Kidderminster signal box was commissioned on 21 November 1987.

Platform 2 was brought into use on Sunday 25 November 1990, with 7819 Hinton Manor making the first operational entry into it.[1]

From time to time further additions were made to the station; these include a number of projects sponsored by the Friends of Kidderminster Town Station such as the Port Cochere style canopy at front of the building and the ornamental roof crestings. The pattern for these cast roof crestings were copied at the SVR's pattern shop from fragments of originals recovered from Ross-on-Wye.

Phase 3, the building of the East wing which is now home to the buffet, took place in February 2006. The concourse roof was also installed at the same time. (Pictures from Wikimedia Commons)

Future plans include a canopy along the platform length similar to that at Bewdley.