The Severn Valley Railway on the main line 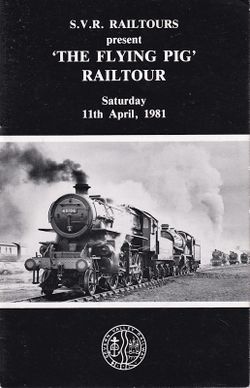 Brochure for SVR Railtours' 1981 "The Flying Pig" railtour
For many years the SVR was closely associated with steam excursions on the main line. In the mid-1970s, even before the company acquired the final section of the line from Foley Park, the SVR set out to become a ‘BR approved’ steam centre, supplying locomotives and rolling stock overhauled to BR standards for use on main line excursions and charters.

The normal arrangement was that locomotives would leave the SVR and travel to other steam centres, in particular the Bulmers Railway Centre at Hereford, to run tours from there. The time spent away could vary from days to months. In between, locomotives would return to the SVR for repairs and overhauls, as well as working services on the SVR itself. The SVR also organised some of of these railtours.

The first recorded use of the SVR's rolling stock on the main line was an excursion from Bridgnorth to Paddington on 13 November 1976. This was hauled by 25292 and 25272 from Bewdley to Kidderminster, and by 47120 to Paddington.[1][2]

The first recorded use of an SVR based locomotive in revenue-earning service on the main line was 6960 Raveningham Hall, which hauled the ‘Cathedrals Express’ from Hereford to Chester on 8 April 1978. (Railtour details on Six Bells Junction)

Listings of railtours and other significant main line appearances are included on the relevant page for each SVR locomotive as follows:

The listings are an attempt to collate information from a number of sources, none of which provides a complete list. Many of the tours are listed on Six Bells Junction (SBJ); links have been included to those that are where normally more information on the precise route and timing for the specific tour may be found. UK Steam is another useful resource, with reasonably complete lists of railtours since 1996. Where railtours were mentioned in SVR News, the issue number and page has been shown.

Other locomotives still resident on the SVR which have worked on the main line in preservation are:

(lists to be added)

SVR Carriages used on the main line in preservation

The following carriages travelled on the main line while based at the SVR, either as part of revenue-earning rail tours or to attend celebratory events:

In the mid to late 1970s the SVR provided a rake of GWR carriages for use on mainline excursions. The first rail tour used 10 carriages, subsequent excursions normally featured a rake of 11. The following carriages were used[3]:

Rail tours recorded in SVR News as using the SVR rolling stock included the following (external links are to tour details on www.sixbellsjunction.co.uk where listed there):

However their use on the main line was short-lived as BR then introduced an annual inspection fee of £1,000 per coach which made their use uneconomical.[10] The C&W notes in SVR News for summer 1980, reporting on the SVR coaches attending the Rainhill celebrations, ended with the comment “What a pity the whole train cannot go out again”[11].

GWR 6913 Brake Composite was overhauled to main line standard in 1985 for use as a support coach for SVR locos working on the main line. The first trip following the overhaul was with 7819 Hinton Manor[12].

SVR Wagons used on the main line in preservation

As part of the 1985 GWR 150 celebrations, the SVR was asked to produce a demonstration goods train to be taken on the main line to Newport, hauled by GWR 2857. BR C&W inspectors approved 25 wagons to run, the eventual line-up being as follows[13]:

A BR Brake van was provided at the rear. The return trip took place in September 1985.

Three BR Flat ED wagons were supplied by Universal Pictures for The Seven-Per-Cent Solution. They were originally classified as 'Horse Box Underframe of unknown ID'[14], and given the temporary numbers SV14191, SV14192 and SV14193. Later research proved their identities to be 906811, 906825 and 906830[15], although it is not clear which two took part in the goods train.