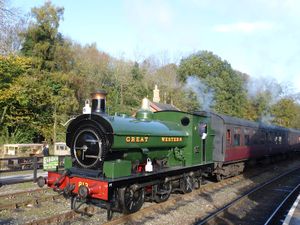 The GWR 813 Preservation Fund was founded in 1966.[1] It is an unincorporated membership organisation. There is currently no annual subscription and membership is granted to those making a minimum donation amount. The Fund owns 0-6-0ST locomotive GWR 813 (originally Port Talbot Railway No 26), together with an extensive collection of wagons and other rolling stock.

When GWR 813 Saddle Tank locomotive was offered for sale by the National Coal Board, it was last surviving item of any form of Port Talbot Railway rolling stock. Although the locomotive was in the usual appalling 'Coal Board Condition', Paddy Goss set up the Fund to preserve it. The purchase price was paid in August 1967 with delivery from Backworth Colliery, Northumberland to Bridgnorth following on 25 November 1967.[2]

While restoration was still in progress, the Fund began to preserve other items of rolling stock. This began in 1969 when attempts were being made to save the Collett coaches from the Swindon Test Train. The Fund acquired Full Third 1146, one of five which were secured for the SVR and arrived on 19 December 1969.[2]

The purchase of coach 1146 was followed by many GWR goods wagons, cranes and other coaches including Full Brake 98 and former resident Corridor Third 4872. By summer 1992 these totalled 72 vehicles,[2] more than half of which were on the SVR with the rest at a number of other preserved railways. The collection has increased further since, now numbering around 100 items of rolling stock.[3] See Rolling stock owned by The GWR 813 Preservation Fund for a full list of the Fund's rolling stock based at the SVR.

On 23 November 2019 the Rouse family donated to the Fund a large portion of David Rouse's photographic archive. It will take some time for the Fund to go through the collection.[4]

The Fund runs a sales stand at Kidderminster Station.

As of February 2021[update] The GWR 813 Preservation Fund has taken the first step to becoming a Charitable Incorporated Organisation[5].