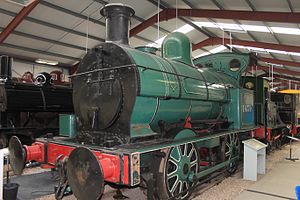 The Fasting Girl was a BBC 2 Wales TV drama broadcast in 1984.[1] It was a dramatisation of newspaper reports in The Times from 1869 concerning a 13 year old Welsh girl, Sarah Jacobs, who was claimed to have fasted, with no significant loss of health, for more than two years until her death[2].

NRM's LNWRLondon & North Western Railway Ramsbottom 0-4-0ST No 1439 was loaned to the SVRSevern Valley Railway for filming which took place in May 1983 at Arley, renamed Pencader for the production[3].

A brief extract is featured in an ABC TV trailer on YouTube, though with no obvious SVRSevern Valley Railway connection.