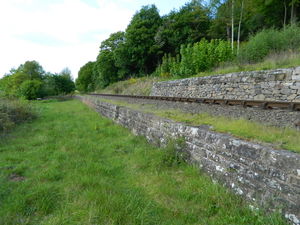 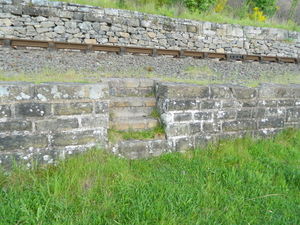 Steps in the Tenbury Wall

"Tenbury Wall" is the name given to the retaining wall between the current SVR line and the trackbed of the former Tenbury line (the grassy area on the left in the first photograph) where they diverge north of Bewdley.

Tenbury Wall is item SVR031* in the Wyre Forest District Council Local Heritage List. The asset is listed as a "Vermiculated stone retaining wall with access steps midway along length", the term 'vermiculated' meaning having a pattern of wandering or irregular lines (from the Latin vermiculus meaning "little worm", because the shapes resemble worms or worm tracks).[1]

Item SVR032* in the Local Heritage List is also situated at the junction of the two lines, to the east of the SVR line (on the right travelling north towards Arley). It is described as a "Random stone wall 1861; appears completely rebuilt recently", and can be seen beyond the line in the photographs.