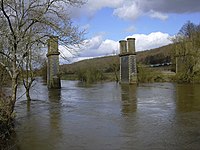 The short remaining length of former Tenbury Branch track immediately north of Bewdley is used as a siding.