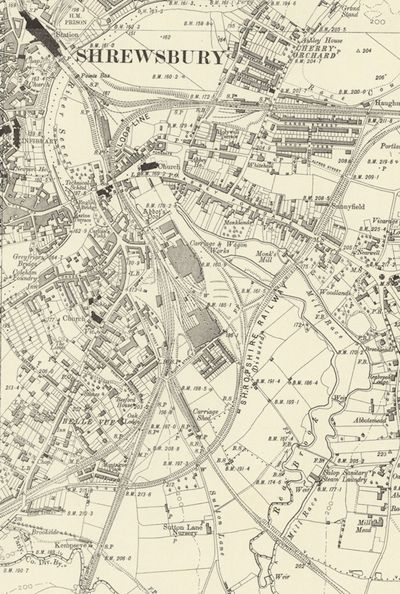 First plans for the Severn Valley Railway involved a connection with the Shrewsbury & Birmingham Railway’s proposed branch to Madeley, leading to an approach to Shrewsbury from the east via Wellington. However difficulties in raising funds for construction of the railway resulted in a revised route, with a connection to the Shrewsbury & Hereford Railway at Sutton Bridge Junction, a little over ½ of a mile south of Shrewsbury.

The picture shows an extract from the Ordnance Survey Map of 1888-1913. On leaving Shrewsbury to the south, the line first came to Severn Bridge Junction. Here the Shrewsbury & Wellington Railway branched off to the east. This was a joint railway of the GWRGreat Western Railway and LNWRLondon & North Western Railway as far as Wellington, and would have been the route by which the Severn Valley Railway, as originally proposed, would have reached Shrewsbury. Next the line passed the Carriage and Wagon works and the Shrewsbury locomotive depot. The latter would have been the home of locomotives working the Severn Valley Railway from the north.

The line then reached Sutton Bridge Junction, which saw the junction of three railways. First, the Severn Valley Line branched off to the southeast. For a distance of 18 chainsAs a unit of measurement, 22 yards or 1/80th of a mile it was double track, due to a Board of Trade requirement of the time that junctions of single lines, either with double lines or with other single lines, were made double junctions. It became single track shortly after passing the 475 foot long 3-road carriage shed[1].

A few yards further on, the Shropshire and Welshpool Railway branched off to the west, enabling trains to reach the Cambrian Railways system at Welshpool. The Shrewsbury & Hereford Railway then continued southwards towards Woofferton, where it met the Tenbury Branch from Bewdley.