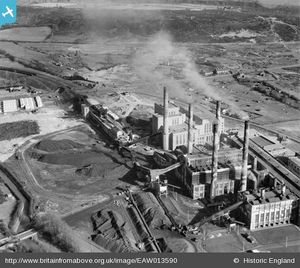 Stourport Power Station from the air in 1948. The exchange sidings are in the top left, with the coal drops in the middle of the image. Note the smoke stacks are painted in camouflage colours. Image from Britain from Above

Stourport Power Station was built by the Shropshire & Worcestershire Electric Power Co., and opened in June 1927 by the Prime Minister, and MP for Bewdley, Stanley Baldwin. Unusually the power station did not have the customary cooling towers, drawing cooling water directly from the adjacent River Severn and River Stour.

Association with the Severn Valley Railway

Coal was initially delivered to the power station via the River Severn or the Staffordshire & Worcestershire Canal (which can be seen passing under the SVR at Falling Sands Viaduct). The additional sidings and canal basin built at Stourport Station in 1885 allowed coal to be brought there by rail, then transshipped to boats for the final leg of its journey to the power station. The majority of the coal came via the canal by barge direct from collieries in the Cannock Coalfield. The coal was unloaded from the barges at the 'Furthermost Basin' by two electric grabs, and transferred to the power station via hoppers along a short length of aerial ropeway.[1]

Authorisation for construction of the power station granted in 1918 included a branch railway of 7.3 furlongs along an embankment, joining the Severn Valley branch 25 yards east of the bridge over the Staffordshire & Worcestershire Canal. This was not built at the time and the powers lapsed. They were renewed in 1938 and the branch line constructed so that coal could be brought in directly by rail. From Stourport the branch successively crossed Mill Road, the River Stour, Hartlebury Road and Worcester Road on plate girder bridges. Main line locomotives were not allowed beyond this last bridge.[2]

The branch opened in early 1940 and by 1949 all but 5% of the coal arrived by this route. A portion of the coal for Stourport Power Station came from the collieries served by the Severn Valley line, with approximately 30% of the output of Alveley Colliery being sent to the power station. The majority of the coal continued to come from Cannock Chase, with such coal arriving at Hartlebury from Stourbridge, often behind a Midland engine. A shunting locomotive was stationed at Hartlebury to shuttle coal wagons between there and Stourbridge.[3] A former NCB employee's recollections of coal workings can be found in Tales from the Severn Valley.

After closure of a nearby sand quarry, the siding which had served it was used to hold trains of coal wagons waiting to enter the power station.

A second power station on the site was opened on 26 September 1950; this became known as Stourport B with the earlier station becoming Stourport A. 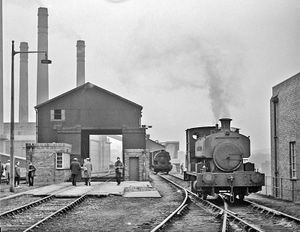 Two CEGB steam locomotives at the power station circa 1968. The small shed can just be seen behind the second engine.
Andrew Barclay 0-4-0ST works number 2088/1940 "Sir Thomas Royden" was ordered for the station and delivered new on 28th May 1940. This article by Adrian Booth suggests that the delivery was initially to Little Barford Power Station in Bedfordshire, with a transfer to Stourport in 1941 when the standard gauge facilities on the power station were completed. The locomotive was named after the Chairman of the Edmundsons Electricity Corporation which operated the power station at the time. It remained in service until 1977, and is now preserved at Rocks by Rail, formerly known as the Rutland Railway Museum.[4] A second locomotive, WG Bagnall 0-4-0ST works number 2665 "General Wade Hayes", arrived in 1942. These two locomotives were the mainstay of shunting operations for some years, although by January 1958 a third locomotive had arrived, Peckett 0-4-0ST 1893/1936, which had begun life at Ironbridge power station as Ironbridge No 2. Bagnall 2665 was scrapped in 1968, and by 1975 the other locomotives were retained as spare, their work having been assumed by diesel shunters. Peckett 1893 was also preserved and is now at the Coleford Railway Museum in the Forest of Dean.[5]

By the 1970s the power station was in decline, with Stourport A being closed in 1976.[5] Coal continued to be delivered to the power station by rail via Hartlebury, but an increasing proportion was delivered by road towards the end of the 1970s, until coal trains ceased in March 1979 and road haulage took over completely.[6][7] The line itself was finally taken out of use on 12 January 1981.[8] Stourport B finally closed in 1984 and has since been demolished, with the area now mainly being a housing estate. The bridge over Worcester Road was demolished on 4 February 1986.[2]