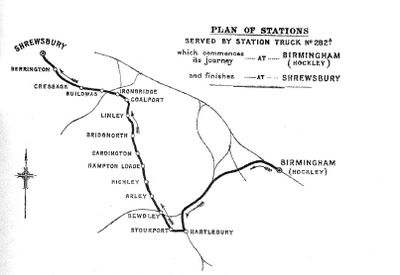 Map of the Station Truck's route 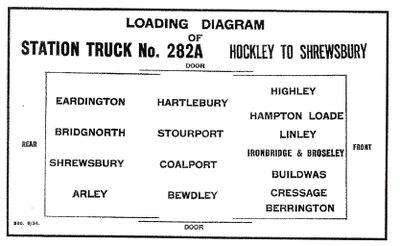 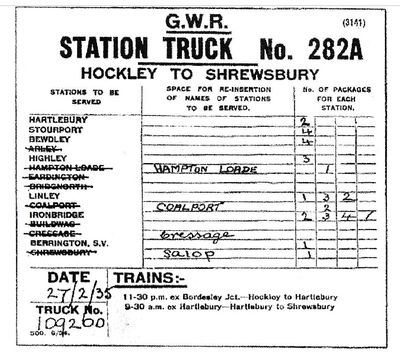 Example of a Station Truck label

A Station Truck, sometimes referred to as a Pick-UpIn reference to the direction of travel means towards the major terminus (i.e. towards Kidderminster on the present day SVR) Wagon, was a goods wagon normally attached to a slow goods train or on occasions to a local stopping train. Its purpose was to cater for small consignments that were individually insufficient to form a full wagon load. The April 1935 issue of the Great Western Railway magazine carried an article on Station Trucks, using the Severn Valley Railway as an example. The following text and accompanying pictures are copied from the magazine.

"The 'Station Truck' is a goods vehicle which is sent off on a journey from one defined part of the line to another to discharge and pick up goods at stations along the route. More than 600 Station Trucks operate daily.

The trucks pick up and convey goods from smaller stations to transhipment depots, where the goods are transferred to other trucks for despatch and unloading at their destinations.

The Station Trucks are a means of giving 'next morning' delivery of goods to small stations far away from their source of supply. In the case of Paddington, over fifty wagons are sent out each night with goods for hundreds of small stations around the system. For example one truck will leave by express freight train just with deliveries for Gwinear Road, Praze, Nancegollan, and Helston, while another will be despatched to Sarnau, St Clears, Clynderwen, Clarbeston Road and other stations in West Wales.

Every Station Truck works to a pre-determined regular schedule and its stops are pre-arranged. A special label is printed for each truck, the one illustrated is for goods to and from the Hockley Transhipment Depot to stations on the Severn Valley Line, or for goods from one station to another on the line, in which case they do not go to Hockley for transhipment. The label shows all the stations being called at and shows the position of goods in the truck for each station. It is obvious that goods need to be easily found or confusion and delay will arise. The positions are such that consignments for say the first station are not covered or made inaccessible by items for stations further along the line. In addition, to ensure that all the packages are unloaded as required there is a printed Station Truck Label which lists all the stations to be called at. The members of staff responsible for unloading the truck are able to see from the label how many articles are for their station. When the truck is loaded any station with no goods for delivery is crossed out. However, if some goods is loaded en-route for that station further along the line there is space to re-enter the station name. There are also columns for filling in the number of packages for delivery at each station. Again, if any packages are added, these additional packages are listed in the extra columns. In the example shown the truck left Hockley with one package for Linley, but a further three were added at one station and two at another. When the truck arrives at Linley the staff will look for six packages at the front centre of the truck. At Bridgnorth the staff will see that their station name has been crossed off and not re-entered en route so will not find any goods for delivery there.

At Shrewsbury the Station Truck Label will be retained for reference. It may be that adjustments will be made depending on the quantity of goods being carried. A return truck from Shrewsbury to Hockley (now numbered 282B) will also run picking up goods for delivery to stations on the Severn Valley Line and for further afield by transhipment at Hockley."

The GWRGreat Western Railway's use of Station Trucks had begun as early as the 1860s, and was still in use in BRBritish Rail or British Railways days as noted below. The 1876 service timetable (before the opening of the Kidderminster Loop Line) refers to station trucks operating between Worcester and Shrewsbury and others handling goods for the Tenbury Branch. Between around 1910 and the mid-1920s station truck workings were included in the rear pages of service timetables; thereafter separate books were produced which listed all station trucks and the trains involved in their haulage.[1]

The article notes that the Severn Valley's station truck originated from Hockley. The GWRGreat Western Railway’s goods operation were organised into around 14 regions (the number varied over time). Geographically, the Birmingham region included the southern end of the Severn Valley Line from Hartlebury to Eardington, as well as Kidderminster, while Bridgnorth to Shrewsbury fell within the Shrewsbury region. The former region appears to have been allocated responsibility for the Station Truck serving the whole Severn Valley line. Another goods region was centred on Worcester.[1]

The station truck label from February 1935, as depicted in the article, shows that the departure from Hartlebury was at 9.30am. The BR(W) 1948 working timetable still included a 9.30am freight departure from Hartlebury. This was certainly a slow goods, as it did not reach Shrewsbury Coton Hill yard until 6.58pm. The stop at Cressage has a note in the timetable 'To deal with Cattle traffic and perform S.T. work only', the S.T. referring to 'Station Truck'.

Another station truck, No 752, served the Tenbury Branch. Under the system in use in 1914, this was taken from Stourbridge Goods Depot down to Amblecote Goods yard at 6.45am, returning at 8.15am to be attached to the 9.10 Class F Goods departure from Stourbridge Junction to Hereford via Kidderminster, Bewdley and Tenbury Wells.[2]

Although Station Trucks provided a useful service, the weight they carried formed only a fraction of total freight, less than 0.5% in this summary of the total loading of wagons from the Birmingham district for the 4 weeks ended 14 April 1929: [1]