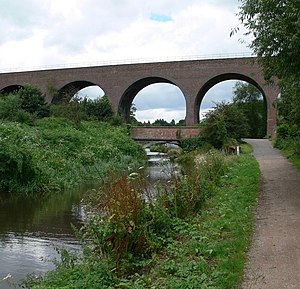 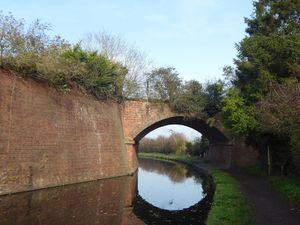 The 46 mile Staffordshire & Worcestershire Canal, known locally as the 'Staffs & Worcs', was promoted mainly by Wolverhampton businessmen and it received its Act on 14 May 1766. James Brindley was appointed surveyor. It first opened in 1771 and was completed the following year, linking the Trent and Mersey Canal at Heywood Junction in Staffordshire with Stourport in Worcestershire.[1][2]

Around the beginning of the 20th Century, a canal basin (the only main line railway/canal interchange throughout the canal) was built near Stourport Station. Much of the early traffic arriving by rail consisted of steel from south Wales and coal from Highley Colliery, which were transferred by canal to the nearby ironworks at Wilden and Stourvale.[3]

After Stourport Power Station opened in 1927, coal for its use was brought via the canal from the Cannock coalfield (through which the canal’s route passed), this traffic being nicknamed the ‘Light Run’. Among the largest collieries involved in the Light Run were the Littleton colliery at Cannock, Baggeridge colliery at Sedgley, and Cannock Old Coppice colliery at Cheslyn Hay. The coal was taken by barge to a canal basin at Stourport, from where it was transferred to the power station by an aerial ropeway. Initially 100% of the coal used there was transported via this method.[4]

A branch line from Stourport Station was opened in 1940; thereafter coal could be brought in by rail from Alveley and other local collieries. This route also replaced the ‘Light Run’ as the method of bringing coal from the Cannock area; by 1949 only 5% of the coal used arrived by water.[5]

Unlike other canals it was never sold or leased to a railway company, staying independent until nationalisation in 1948 under the British Transport Commission, the Docks and Inland Waterways Executive and later the British Waterways Board. In July 2012, along with the rest of British Waterways' assets in England and Wales, it transferred to the newly formed charitable Canal & River Trust.

The canal meets and crosses over the River Stour near Prestwood in Staffordshire. From there it follows the river's east bank through the villages of Stourton and Kinver (Staffordshire) and Caunsall, Cookley and Wolverley (Worcestershire). At Kidderminster the canal crosses back over the river to its west bank which it then follows to the South. The canal and the river can be seen from the train as they pass under Falling Sands Viaduct near Kidderminster. The original Severn Valley Railway also crossed the canal at Mitton Railway Bridge on the outskirts of Stourport.