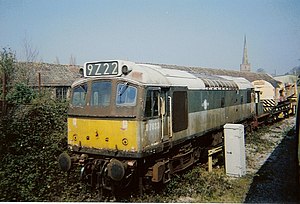 By autumn 1985 the Permanent Way Department were finding that using 15 mph 0-4-0 Ruston Diesel shunters on an extended 16 mile railway was leading to restricted loads and reduced working time on site.[1] The weight of some works trains was proving too much for even double-headed Rustons. Members of the Department formed a committee and established a Fund to acquire a more powerful diesel. Initial options considered for purchase were a Class 14 from the NCB or Class 25 from BR.[2]

By spring 1986 the committee had decided to opt for a Class 25 for several reasons, including the lack of availability of a suitable Class 14, the feeling that a Class 25 would command more popular support, and the option to use the Class 25 as emergency standby for passenger services. The committee notified BR of their interest, while fund raising continued.[3]