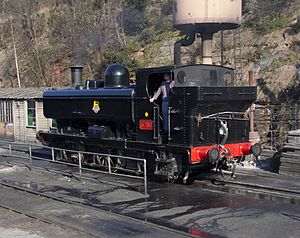 The Rock Siding is a double-ended siding at Bewdley, situated on the Eastern side of the station, opposite platform 3.[1] Its name originates from the adjacent rockface, which was cut away to allow for the building of Bewdley Station. The south end of the siding is used for servicing steam locomotives as Bewdley MPD, whilst the north end is usually used to store the Class 108 DMU when not in use, although the DMU is occasionally temporarily stationed elsewhere during special events to clear the siding, such as the Spring and Autumn Galas.