Difference between revisions of "Query Corner"

Please add to this page as questions come to mind. To add to a new question, put a short summary as a new section title (e.g. == Kidderminster Questions ==), and add some context below.

When replying to questions, you should add a signature to identify yourself, and to break up different replies - his can be done automatically by clicking the add signature button on the editor (second button from the right) after typing your reply, which will generate a time-stamped signature for you when you save the page.

It is possible to indent your reply by placing a colon at the start of each line, e.g. : Indented Text. Additional colons will indent your text further.

We have a small number of links to pages that don't exist yet
If you have any knowledge of the subject, please go ahead and create the page.

Which carriages are in regular use?

Because its on a slight curve each of the four roads of the carriage shed varies slight in length. It capacity is generally considered to be 56 bogies coaches.
Boldford (talk) 17:45, 1 February 2015 (UTC)

I'll take a look at the news next time I'm home, but the Limited would usually be S(5). The Venturer would be two coaches attached to the South (KR) end of Bridgnorth's service train for the day.

I guess I may as well mention the Observation Saloons, which will run as required for Cream Tea services (one obbo at the KR end of the train) or as private charters attached to one end or the other of a service train (I think the KR end is more usual, but I've seen it the other way round, and even with an obbo both ends). --Danny252 (talk) 09:57, 29 January 2015 (UTC)

I've had a go at adding the various sets to the carriages page.
I'll try to compile all the information I want by observation over the next few weekends, but in the meantime, does anyone know:
Is the list in SVRSevern Valley RailwaySVRA:Severn Valley Railway AssociationSVRS:Severn Valley Railway Society News, Winter 2014, still current?
Which LMSLondon Midland & Scottish Railway carriage is in Set S?
Which carriages make up the SVV?
--Graham Phillips 110 (talk) 12:41, 25 February 2015 (UTC)

The Winter 2014 list is a little out of date. I've added a note under the set lists for M,N and C of the configurations that were in use last Saturday (7th March). I guess things get added and taken off as required - the Crimson and Cream set had 6 in use for a footplate experience but would presumably grow to 7 or 8 if used in service. Interesting that a couple of the changes are in the middle of sets though.--Robin (talk) 19:05, 13 March 2015 (UTC)

I noticed your lists were a bit different to the ones I copied. Presumably the buffet was left out as it's not needed on a Footplate Experience. Isn't there some complication with mixing and matching couplings and corridor connections, which might explain why carriages are not always added or removed from one end or the other?
80609 is not on the VCT list. Is that the correct number, have they missed it?
If the sets are going to change frequently, then perhaps the section needs altering. Maybe we could either give a list of known previous compositions of each set, which could get quite long with all the possible combinations, or just word it something like "Set C is made up of up to 9 of the following carriages..."
--Graham Phillips 110 (talk) 23:47, 14 March 2015 (UTC)

80609 should be 80969 (typos, my specialism!). AIUI there are a number of other considerations. The Guard/brake van has to be near the middle to be on platform at shorter stations while the buffet tends to be near the middle, presumably for expediency. Obbos would naturally tend to go on the end. The lists you copied were from the Autumn Steam Gala where presumably the requirement is maximum possible passenger numbers hence 8 regular carriages in each set. However sets may be shorter at other times, for example the AN1 set in March may only need 6 + an obbo for cream teas or whatever. It will be interesting to see what is in use for the Spring Gala, and whether it changes again afterwards.

A Facebook discussion has brought up this image of a brick construction, situated behind Bewdley North signal box, with the question being what it actually was. Initial suggestions were that it might be an air raid shelter, but the lack of an entrance and strange siting seem to rule that out, and it has been mentioned that the brickwork seems similar to the the signal box itself. The leading suggestion now seems to be that it could have been a lamp hut, but with no real evidence other than it being of about the right size and in a sensible location.

Some alternative views can be found in photo 1 and photo 2.

I've added the combined thoughts of John Marshall, Michael V.E. Dunn and Keith Beddoes as they appeared in SVRSevern Valley RailwaySVRA:Severn Valley Railway AssociationSVRS:Severn Valley Railway Society news, see Bewdley North signal box#Lamp Room and plinth. Draw your own conclusions, for what it's worth I go with the John Marshall view that the plinth was built for the lamp room, typical GWRGreat Western Railway "when in doubt over-engineer it so it won't fall down".--Robin (talk) 23:10, 27 December 2015 (UTC)

Width of Bridge 16 at Arley

The Accommodation bridge south of Arley appears to be the only bridge not originally built to double track width.
Does anyone know why? --Graham Phillips 110 (talk) 08:52, 18 November 2015 (UTC)

There are a number of articles containing potentially dated statements.
Can you help with any of these?

One of the buildings in the old coal yard between Kidderminster station and the Footbridge is the restored ex-Bridgnorth bus garage, of which details and a picture can be found on the Friends of Kidderminster Station website here. Is this the same building that can be seen just behind the pannier tank in this Sellick photograph? It would seem a logical place for it.

Not been in query corner for a while, but here's two for the price of one. Looking at the Occupation bridge near Eardington ground frame the other day, I noticed a couple of oddities. Firstly the bridge is No 27 in the List of infrastructure, but has an obvious number 32 in the style used for bridge numbering (left of the photo). Were the bridges renumbered at some point? Secondly, there is a sign saying (I think) "Huxleyheath Junction". I know the location of the Ground Frame used to be called Osborne Junction, but is there any reason for the name there now?

Just a guess, but there's about five more bridges between Hartlebury and Bewdley than there are between Kidderminster and Bewdley. Could that be the original SVB number? If so, it's very durable paint. --Graham Phillips 110 (talk) 05:58, 23 June 2016 (UTC)

I dare say I've never heard of any motor-operated signals on the line, and wouldn't really have expected them, given that the distances to signals were generally less than they are now (not many 1000-yard signals back then!). Still, never say never... --Danny252 (talk) 08:38, 3 October 2016 (UTC) 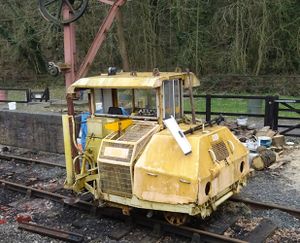 This piece of on-track plant was at Highley last weekend. Can anyone shed any light on what it is, what it does, and whether it is on hire or has been acquired? --Robin (talk) 20:48, 18 February 2019 (UTC)

Paul Fisher on FB says 6430 in 1996 spent some time having cracked cylinder blocks repaired at the Valley. Can anyone verify details, so it can ve added to the Timeline? Thanks--Patrick Hearn (talk) 19:38, 15 August 2019 (UTC)

Not a query as such, more a list of photos to take and information to research etc..

We probably need a standard 'location' description for wagons (and carriages) that are in use and move up and down the line on a regular basis. "In service"?