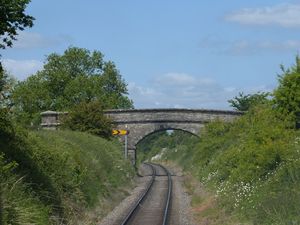 Pig Bridge (Bridge 31) is a stone overbridge providing road access to a farm and some fields just south of Eardington summit.

The bridge is one of a number on the Severn Valley branch on which the GWR carried out structural repairs during 1915. A small plaque dated 30/4/15 is visible on the left hand pier when travelling towards Bridgnorth; a similar plaque may be seen on the Accommodation bridge off Northwood Lane.

The bridge gained its name in the early days of the Severn Valley Railway Society. Working parties would push a platelayer's trolley from Bridgnorth to Hampton Loade to work on restoring the station, returning by the same method later in the day. They would often find the line near the bridge occupied by pigs that would escape from a neighbouring field and could become quite vicious when the volunteers attempted to move them off the railway.[1]