Difference between revisions of "Northwood Halt" 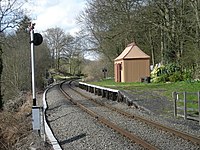 Northwood Halt is a request stop located between Bewdley and Arley, immediately adjacent to the level crossing at Hill Farm, Northwood Lane.

The halt was originally opened by the GWRGreat Western Railway in 1935, and closed with the withdrawal of passenger services north of Bewdley in 1963. It reopened with the SVRSevern Valley Railway extension to Bewdley in 1974. In 2006 the halt's wooden shelter was replaced with an award-winning GWRGreat Western Railway-style corrugated iron 'pagoda' shelter. This was constructed by the "Friends of Kidderminster Town Station" and transported to Northwood by rail.

The platform is on the East side of the railway with a small pagoda shelter and a view across the River Severn to the Wyre Forest. Access to the platform is via a short footpath from the adjacent level crossing. The level crossing is protected by warning lights triggered by approaching trains. There is no car parking nearby.

Northwood Halt, as seen from a passing train which stops briefly, hauled by 92214 - a SharposWorld video