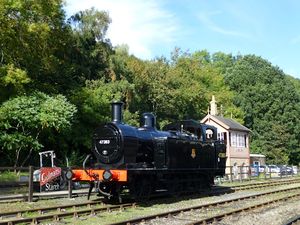 A group of enthusiasts formed the Manchester Rail Travel Society (MRTS) in 1966 with the intention of acquiring a 'Jinty', the LMS standard shunting tank locomotive. To raise funds, the MRTS promoted a number of 'end of steam' rail tours, and also co-promoted four rail tours in conjunction with the emergent Severn Valley Railway Society.[1] Two of the joint rail tours in 1968 were partly hauled by LMS Stanier 8F 48773, then still a BR-owned locomotive.[2] One tour also featured future SVR 'Black Five' 45110.

As a result of this relationship, 47383 became the 5th locomotive to join the SVR, arriving by road from Blackwell A Winning Colliery in May 1968 some two years before the official opening.[1]

The following rail tours were organised by the MRTS. Links are included to tour details on Six Bells Junction.