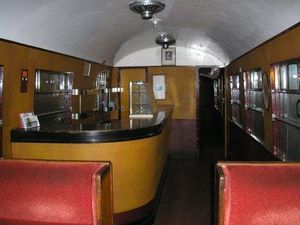 643 was one of six built for Great Eastern section excursions and cross country expresses, and is believed to have been used on fast five coach Liverpool Street-Cambridge services (known colloquially as "Beer Trains"). In common with other GresleySir Nigel Gresley, Chief Mechanical Engineer (CME) of the London & North Eastern Railway 1923-1941 buffet cars of the period it had electric cooking facilities powered by large axle driven dynamos (or landlines when stationary) with an attractive art deco interior finished in Rexinean early form of vinyl used by the LNER for wall coverings in teak coaches; in this case gold and red. Loose seating was provided in the form of tubular chromed chairs.

In November 1943 the LNERLondon & North Eastern Railway renumbered its LNERLondon & North Eastern Railway-built carriage stock and 643 became 9131. At Nationalisation in 1947 BRBritish Rail or British Railways initially allocated a 'region of origin' E prefix, replaced in the early 1950s by a prefix showing the region of allocation and suffix showing the region of origin, resulting in a final number of E9131E.[2] Sometime during the late 1950/early 1960s period it was extensively rebuilt with gas cooking, enclosed bar, and MK 1 style grey Formica interior decor, in which form it survived in BRBritish Rail or British Railways ownership until 1977.

643 arrived on the SVRSevern Valley Railway on 16 November 1977 shortly after withdrawal by British Rail and in their then current livery of blue and grey. It was initially purchased for the SVRSevern Valley Railway by Messrs. Gardner Shaw, a Brierley Hill soft drinks firm.[3] Following arrival it was quickly restored externally to varnished teak livery, and saw service (with one largely cosmetic intermediate overhaul) until being withdrawn to be comprehensively restored over 4 years by LNER Coach Fund volunteers to original internal and external condition in 1987. Just before withdrawal, it was one of the coaches used in the filming of the television series Hannay. It subsequently ran for a short time with the original loose chairs, but proved much more popular with passengers after these were replaced with BRBritish Rail or British Railways Mk1 second class "2+ 1" seating.

By 1998, ownership had been passed to SVR(H).[4] 643 returned to service in April 2014, following a 4 month visit to the paint shop.[5] In early 2016 ownership was transferred to the SVR Charitable Trust, and 643 regularly forms part of Set N, the LNERLondon & North Eastern Railway & GNRGreat Northern Railway Teak carriages.