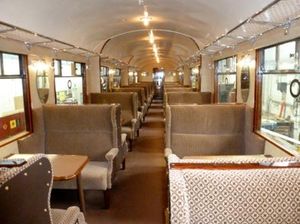 43600 arrived on the SVRSevern Valley RailwaySVRA:Severn Valley Railway AssociationSVRS:Severn Valley Railway Society on 3 April 1980 in black livery. It was painted brown given a set of plastic chairs borrowed from the Catering Dept. and was used in service trains from that September until late 1984. Restoration into 1935 livery but with a very basic "temporary" interior, (fortunately including proper seats, heat, light and working toilets) was completed in 1987, after which it was used for 27 years!