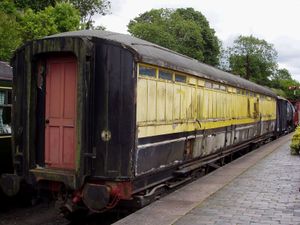 The body of 24506 began life as an LNER Gresley teak Pigeon Van. Since arriving at the SVR, it has been mounted on a donor underframe and rebuilt as a Corridor Brake Third (BTK).

The LNER and other railway companies built Gangwayed Full Brake/Pigeon Vans (Type BGP) whose primary purpose was the transport of racing pigeons. LNER 70759 was one of 16 such carriages ordered in 1941 and eventually built in 1943 as Lot 1073 to Diagram 245.[1] The LNER carried out a complete renumbering of its carriages during 1943 but the delayed construction of the final batch of Gresley carriages meant they were the only ones outshopped new without ever carrying a pre-war style number.

Being equipped with fold down shelves, the design gave a very versatile carriage able to carry a wide variety of traffic including parcels, passenger luggage (occasionally accompanied by its owners!) and racing pigeons. The carriages could also be used in wartime ambulance trains. There was a guard's area towards the centre which in about 1945 was enclosed as a compartment in response to complaints that the guards were feeling the cold. This left a 'long van' at one end occupying slightly over half the length of the carriage and a shorter van at the other end.

Post-War, 70759 continued in service in BR's Eastern Region where it ultimately carried the number E70759E. It was withdrawn from service by BR in October 1972[1].

After withdrawal by BR, 70759 was one of three carriages purchased from BR by the publishers David & Charles for use as a store at their Newton Abbot premises. BR promptly lost all three and disclaimed responsibility for their delivery, stating that they could neither find the carriages nor refund the purchase money. With the aid of some railway enthusiasts they were eventually traced to York marshalling yard, where one of them had been pressed into service as a staff mess room. The marshalling yard master said there would be a strike if the publishing company tried to remove their vehicles, which took around a month to resolve. Eventually the three carriages did move to Newton Abbot where, carrying the 'David & Charles' name, they were prominently visible from passing trains at the west end of the station. BR then complained that the transfer terms did not allow the company to advertise, to which the company replied that the offending destination boards were not advertising but merely stated where the coaches were going![2]

In April 1991 70759 moved to the South Devon Railway where it was again used as a store.[3] In summer 2004 the carriage came to the attention of the Trustees of The LNER (SVR) Coach Fund after a member of the South Devon Railway staff remarked to some visiting SVR members that "It's for sale, you know". The carriage was still almost complete and appeared in better than average condition, leading to discussions on how it could be of use to the SVR. Several options were considered for its use for a few years at Bewdley, along with the more radical suggestion of conversion to a passenger-carrying brake. The Trustees decided to acquire the carriage and then to consider the matter further. 70759 was therefore purchased in December 2004 and moved from Buckfastleigh to Kidderminster on 17-18 March 2005[4].

After a short period of storage in the Kidderminster Carriage Shed, 70759 was moved to the former cattle dock siding at Bewdley. Some initial conservation work was undertaken, including replacing a few rotten panels with exterior grade plywood and removing the guard's lookout which had mostly turned to rust. While still at Buckfastleigh the roof had been repaired and one side repainted in plain maroon. The other side, which was still in David & Charles' yellow and black livery, was therefore repainted maroon to match. Internally the 'long van' was re-painted and converted to house-the LNER/Bewdley Station Funds joint shop, while the shorter van was used as a storeroom for parts waiting to be fitted to GNR 2701. By the end of 2005 some initial design work for the conversion to a passenger brake had begun,[4] although with the Fund's other carriages requiring work and significant fund raising needed for the conversion work, it was considered a 'long term project'.

Early in 2009 the owners of the Lakeside and Haverthwaite Railway indicated their desire to dispose of Gresley Full Brake 4149 which had served for around 30 years as staff accommodation. There was little interest from elsewhere and the SVR needed a spare set of bogies, so it was bought by SVR(H) (with the aid of a loan from the LNER (SVR) Coach Fund) with the intention of bringing it to the SVR to be dismantled for spares. Shortly afterwards Railway Vehicle Preservations (RVP) advised the SVR that they owned an identical Brake to 70759, BGP 70442 (built in 1941 to Diagram 315 Lot 1017 and originally numbered LNER 4069), whose bodywork was in far worse condition but which they wished to restore. With the agreement of all three parties, 4149 was therefore moved from the Lake District to Swithland on the GCR. After inspection, the two carriages were swapped apart from the bogies, 4149's being in better condition. RVP went on to restore 4149, a carriage of some historical significance,[note 1] while the source of spares which eventually arrived on the SVR comprised the poor bodywork but relatively good underframe of 70442 mounted on 4149's bogies[5].

By mid-2010 the Fund was in a position to begin the conversion of 70759 to return it to service as a second LNER brake van (BTK) for the teak set. This would be a major and costly undertaking and be dependent on securing grants and match-funding donations. In order to maximise the funding opportunities Fund decided to gift 70759 to the SVR Rolling Stock Trust (now the Severn Valley Railway Charitable Trust Ltd). The project would then be physically undertaken by the LNER (SVR) Coach Fund team on behalf of the Trust. A survey had been carried out which revealed a number of compromises made during the carriage's wartime construction. These included pressed steel corner brackets rather than the usual stronger wrought iron ones, nails used instead of the usual screws, and an assortment of different bolts to secure the pigeon basket racks. Many of the lower and end panels were of plywood rather than teak, which was in short supply at the time.[5]

The design chosen for the conversion essentially followed LNER Diagram 114, a four-compartment corridor Brake Third (BTK). The four compartments and corridor, together with a toilet, would occupy the 'large van' end while the 'small van' end would be retained as the Brake's luggage van. However there would be variations from that diagram, principally that the guard would normally be accommodated in the far corner of the luggage van (a similar layout to LNER 24068). As the full Brakes gave the guard the relative luxury of a compartment at the centre of the carriage, this feature was to be retained, both to give the SVR guards some comfort and also to save altering the brake gear.[5].

GWR Snake C 1145, which had recently been refurbished by The LNER (SVR) Coach Fund, became the Fund's new shop, while 70759 moved into Bewdley Yard on 8 December 2010 for restoration work to begin. 70759's own underframe was heavily corroded and therefore an early part of the restoration involved dismantling the body of 70442 while recovering any useful spare parts, and then overhauling its underframe. On 12 July 2011 the body of 70759 was moved onto the newly refurbished underframe of 70442, which by that time had been purchased from SVR(H) by the Charitable Trust to ensure the latter would have 'clear title' to the completed vehicle.[6] A time lapse video of the move is available on Underframe Swop.

In mid-March 2012 the SVR received a delivery of teak which was used for the fitting of new panels on 70759. SVR News recorded that "…the teak we have received, legally purchased in Germany, is believed to be from the flotsam of the 2004 Indian Ocean earthquake and tsunami disaster. This is a sobering reminder of the human tragedy of the tsunami. We shall never know the story that our teak could tell. But 70759 will in some small way be a memorial to the lives lost in that awful event'." By summer 2013 the teak panels had been fitted and the internal body frame modifications to form the four new passenger compartments had been completed,[7] with many parts from the body framing of 70442 being incorporated. An unforeseen problem was the need for the complete replacement of the roof, due to extensive corrosion of the poor quality fixings used in its wartime build. In August 2013 70759 moved into the Bewdley Paintshop where the new roof was fitted as a joint volunteer/full time project. With the exterior restoration substantially complete, 70759 was formally 'rolled-out' of the C&W Works on 30th January 2014, effectively marking the midpoint of the project.[8]

Internal restoration continued for the next 18 months. On Thursday 30 July 2015 70759 was shunted out of Bewdley C&W, moving to Kidderminster on Friday 7 August 2015 for further varnishing, and then to stay in the carriage shed whilst awaiting its turn in the mechanical workshop and paintshop. It entered the paintshop on 14 December 2015 for lining and lettering, further paint and varnish plus internal finishing.

Gresley carriages in the 70000 number series were Parcels and Pigeon vans. With 70759 now being a Corridor Brake Third, the Trust considered that a new number was required. 24506 was one of two 1939-built four compartment Brake Thirds to Diagram 114 which had been destroyed by enemy action during 1943. LNER practice was to transfer the identities of destroyed rolling stock to their replacements (A3 "Grand Parade" being probably the best known example). Although the converted 70759 had design differences from Diagram 114 vehicles, an impoverished LNER might well have adapted existing surplus vehicles to fill the urgent post-war need for additional passenger carriages using available spares to a variant 'Diagram 114A' layout. The Trust therefore felt it appropriate to reallocate the number 24506 to 70759 as a hypothetical reconstructed replacement, albeit one built 73 years later.[9]

Internally the seats were upholstered in red & black cut moquette. Reproduction frames for the oval mirrors were made at Boston Lodge and their oval beveled mirrors by a firm in Kidderminster. The batteries were put in place and made to work, and LED lamp bulbs installed. The 'small van' and guard's compartment were restored to 1950s vintage condition, and the original pigeon racks refitted. On the mechanical side, the gangways, vacuum brake cylinders and dynamo/regulator set were refurbished and re-fitted, whilst the bogies were refurbished by volunteers and apprentices.

24506 was outshopped from the paintshop on Tuesday 9 February 2016, matching the rest of Set N in full pre-war livery and carrying its new number. On Thursday 17th March it entered the mechanical workshop for the completion of steam heating, re-bushing of brake linkage, a small amount of new platework, fitting of refurbished bogies, brake cylinders and gangways, and other mechanical work necessary before entry into SVR service.

On Wednesday 17 August 2016 24506 was successfully test run between Kidderminster and Bridgnorth behind GWR 813. It was added to Set N on Friday 19 prior to its first run in SVR passenger service on Saturday 20 August 2016.

The work was paid for by the owners, the SVR Charitable Trust which raised £70.1k in donations, gift aid and grants through the generosity of its many enthusiastic supporters. The underframe of 70759 has been dismantled for spare sections, the centre portion being retained at Kidderminster carriage works as a strong and stable workbench[10].